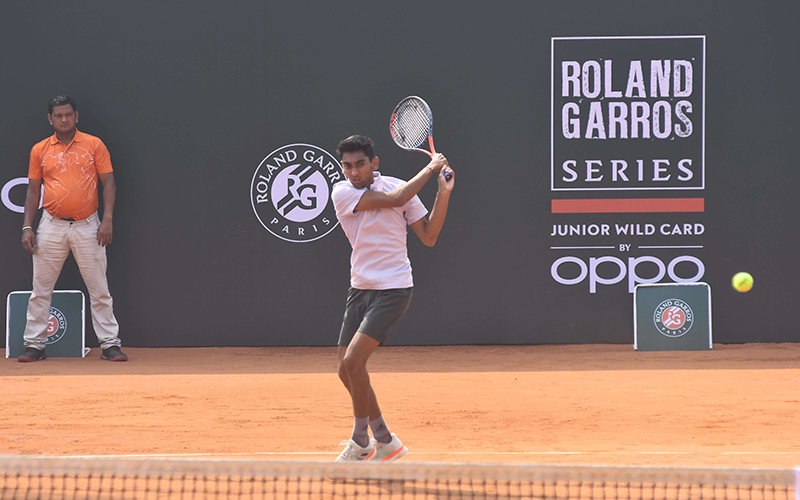 Tournament ambassador and 4-time Gland Slam champion Mary Pierce witnessed the action on the final day of the tournament and gave away the coveted trophies to the winners. The two players will now travel to Paris to compete against their counterparts from Mexico, Brazil and China in the Roland-Garros Junior Qualifiers with a shot to qualify for the main draw of the Roland-Garros Junior Tournament 2020.

In the Girls’ category unseeded Vaishnavi Adkar and Sanjana Sirimalla pulled off upsets against the top seeds to reach the final. The two young players battled it out in a tense, three-setter which went down to the wire. After losing the first set 4-6, Maharashtra girl Vaishnavi Adkar registered yet another gritty comeback to win the 2nd set 6-4. In the third set, fortunes fluctuated till Adkar eventually clinched the set 7-6 (3) in a tie-breaker.

After the win, an elated Vaishnavi said, “I don’t think anybody, least of all me, expected this result. I am really looking forward to competing in Paris. The exposure of playing against international players will immensely help me to improve my game.”

The Boys’ final was a more straightforward affair as top seed Dev V Javia stamped his authority over the competition once again to defeat Chirag Duhan 6-2, 6-1. Gujarat player Javia’s dominant performance throughout the tournament saw him clinch the title without losing a single set in all three matches. Up and coming player Duhan put on a brave display but ultimately proved to be no match for Javia.

Reflecting on the competition’s significance for young players, Javia said, “Playing in this tournament is great preparation for the international stage because we get a chance to play on European clay at the DLTA. While India has many clay courts, playing on European clay is different as the ball bounces higher and travels slower. This experience will hold us in good stead in the future.”

In the 3rd place playoffs, top seed Reshma Maruri defeated 2nd-seed Akanksha Nitture 4-6, 6-2, 10-6 in the Girls’ category. Meanwhile in the Boys’ category, Mohit Bondree ended his campaign on a high after getting a walk-over from Nitin Jaipal Singh.