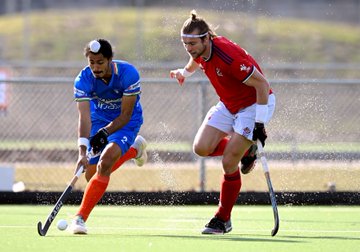 Star striker Dilpreet Singh has had a dream run so far with the Indian Men's Hockey Team. Ever since his grand outing in the Sultan of Johor Cup in 2017 where the India Colts won the Bronze Medal, Dilpreet's career has soared to new heights. He was called-up for the Senior Camp and soon became part of the team in almost every major tournament since 2018 including the Commonwealth Games, Asian Games as well as the World Cup in Bhubaneswar, Odisha.

Now, having been part of India's historic feat at the Tokyo Olympic Games where they won the coveted Bronze Medal, a feat India has been waiting for 41 years, Dilpreet feels fortunate to be part of this team. He said, "We all worked so hard to achieve this feat. We never let any difficulties during the pandemic affect our morale. The Seniors played a big part in encouraging us constantly and making us feel like we can do this. I feel so fortunate to be part of this incredible group and yes, I do believe I have been lucky to have had such a great start to my international career," stated the young forward from Punjab.

Only 21-years-old, Dilpreet said the support he received from Hockey India and the support staff particularly when he was dropped from the Senior Team following the 2018 FIH Men's World Cup where the team was knocked out in the Quarter Finals became the turning point of his career. "Looking back, surely that was not an easy period for me. Maybe I could not handle the success of getting to play in such major tournaments so early in my career. I was hardly 18 or 19 years old then. But I am really grateful to Hockey India and the support staff who gave me all the support I needed back then and helped me mature as a player."

"The Junior Team Coaches guided me all through 2019 and I also worked closely with the psychologist in SAI, Bengaluru at that time. After Chief Coach Graham Reid took over, he watched me during training and spoke to me personally and that motivated me a lot. After I got a chance to come back to the Senior Group, there has been no looking back," expressed Dilpreet.

Moving ahead, Dilpreet believes the team has that fire in their belly to achieve greater feats. "I truly believe this is a new beginning. We all want to achieve more, and we want people to give us more love and continue to support us. And for this to happen, we know we must consistently perform well at major tournaments. We are mentally prepared for it," he concluded.