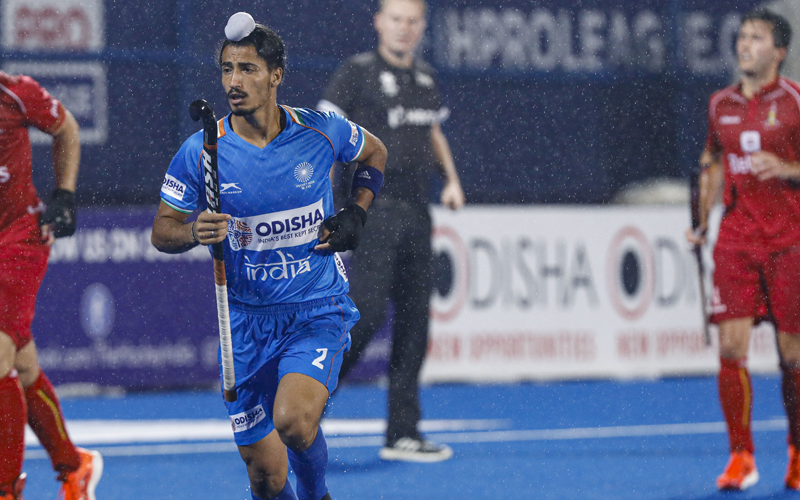 Possessing exceptional attacking skills, Dilpreet Singh had shown a lot of promise when he made his Senior India debut in 2018 and he was touted as the next big thing in India's forwardline. But after the FIH Men's World Cup debacle in 2018, Dilpreet was demoted to the Junior Camp and was asked to work on his fitness with special emphasis on his discipline on the field and overall attitude. "I was in the Junior National Camp when Chief Coach Graham (Reid) watched me train and he spoke to me individually," recalled Dilpreet Singh, who was a key player in India Colts' Silver Medal feat at the Sultan of Johor Cup last year.

It was this meeting Graham had with Dilpreet last year that put the youngster that fast-tracked his return to the Senior India squad. "When he met me, Graham spent quite some time with me to understand my background, how I got into hockey and he was interested to know more about my game though he said he had seen me during the World Cup. He asked me to work hard, improve my attitude, be more disciplined in my game and work on my fitness level if I wanted to make a comeback in Senior Camp. He said if I improve in these areas I had a chance to return and he had also warned that there are a lot of other players waiting to grab this opportunity. Of course, Chief Coach speaking to me then gave me a lot of confidence and hope to make a comeback," expressed Dilpreet who hails from Butala village near Amritsar, Punjab.

When Dilpreet was picked in the Core Probables group for the FIH Hockey Pro League season earlier this year, Dilpreet knew he should not waste away this chance but at the same time, the task ahead of him was not easy. "I did feel the pressure initially but Manpreet would have long chats with me building my confidence and when I was called up for the match against Belgium, he advised me to play with confidence, focus on the specific role given to me. I was quite nervous and was not sure if I was up for the challenge, especially to play against the World Champions where any small mistake could cost us dearly but Manpreet and other seniors gave me that confidence," Dilpreet said.

With the Olympics now postponed by a year, Dilpreet feels he has the time to hone his skills and focus on the areas Graham has asked him to improve and be in the reckoning to make the Olympic-bound squad. "After the FIH Hockey Pro League matches, Chief Coach has asked me to improve on certain areas like my defensive skills, tackling and putting pressure in the final minutes of the match. The postponement will certainly give youngsters like me a chance to prove ourselves and keep hopes up to earn a place in the India squad for the Olympics," he said.