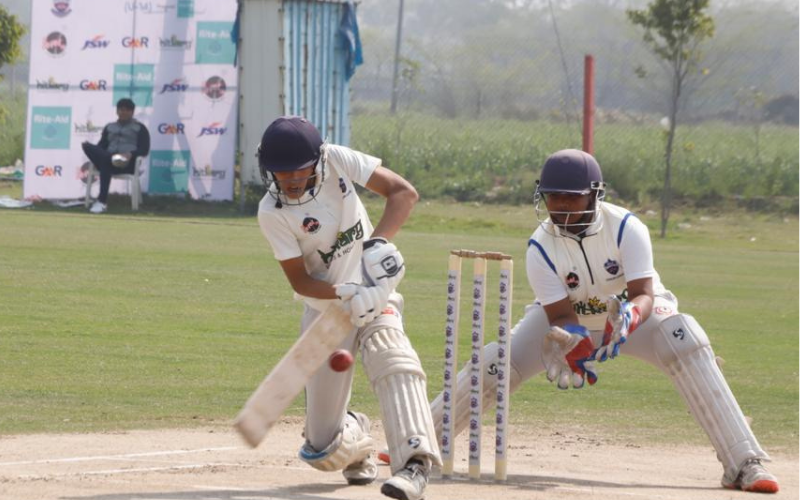 The first week of the DC Junior League 2021, which began at the Bal Bhavan International School, Dwarka on 21st February 2021, saw numerous talented U-14 players steal the show in the competition. From a double century to six sixes in an over, the 40-over tournament has seen it all.

Telefunken CC's Shaurya Seth blazed his way to 221 runs off 124 balls against Push CCE on his 13th birthday to help his team set a total of 455/2, which is the highest team total of the competition so far. Seth, who smashed 30 fours and 4 sixes in his innings, was ably supported by Kunal Sangwan (101* off 69 balls). The Telefunken CC side defeated Push CCE by a whopping 360 runs.

After the high of a double century by Seth, LB Shastri CC's Captain Arnav Bugga struck six sixes in an over during his innings of 155 runs (off 65 balls) against Harry CA. The Skipper, who cracked 18 fours and 11 sixes in his innings, led his team to a 276-run victory over the Harry CA side.

The 16-team tournament is being organized to provide a platform for both, boys and girls from the U-14 level, to showcase their talent. Three teams have fielded mixed teams in the competition with Simran Chauhan, Saachi and Minakshi playing for Sports Cube, Push CC and Telefunken CC respectively.

A total of 16 matches have been played in the DC Junior League 2021 so far and Sonnet, Telefunken CC, Baba Haridas CA and Wonders CC have already qualified for the quarter-finals.

"The purpose of this league was to give children the much-needed competitive exposure which they had missed in the last one year. Over 240 kids between 10-13 years of age have been playing their hearts out and expressing their hunger for the game," said Jagrit Anand, Head of DC Academies, on the competition. "The tournament has already seen some great records with a 13-year-old boy scoring a double century and another one hitting 6 sixes in an over. There's a lot more to come in the next week of the competition."