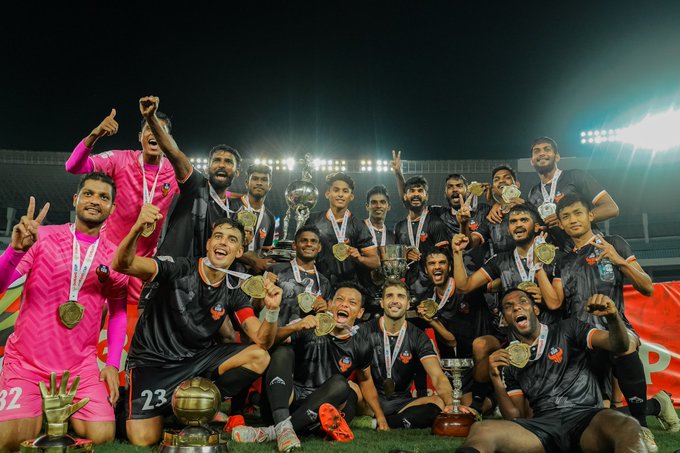 A goal from FC Goa skipper Edu Bedia in the first half of extra time helped FC Goa overcome Mohammedan Sporting’s challenge as the Gaurs had their first taste of silverware this season, winning the Durand Cup trophy for the first time in club history with a 1-0 win at the Vivekananda Yuba Bharati Krirangan tonight in Kolkata.

A free-kick from the left foot of the Spaniard proved to be the difference in a final that was largely devoid of sharpness from either side in the final third.

With four players missing due to international commitments and Jorge Ortiz out of the scheme of things due to an injury sustained earlier this campaign, it was again the youngsters that Juan Ferrando called upon to deliver alongside three foreign stars. And deliver, they did.

A cagey affair throughout

A feisty first half saw the referee reach his pocket a number of times with three Mohammedan players being shown the yellow within the first half an hour. The physical nature of the game meant that neither of the keepers saw much action in the first forty-five.

The only chance that either of the sides could really muster up fell to FC Goa when Sanson Pereira linked up well with Alberto Noguera on the left. The left-back darted behind the Mohammedan backline before cutting back for an onrushing Alexander Romario Jesuraj. The winger though failed to test the keeper with his effort.

On the other end, Mohammedan looked to use Marcus Joseph and young winger Faisal Ali to launch their attacks. However, they were well shadowed by a disciplined Goa.

The second half followed suit with the heat and humidity of Kolkata playing a big role in bringing the pace of the game down as the game wore on.

FC Goa increased their footprint on the game in the second forty-five with their ability to pass the ball around playing a key role in keeping the game under control for their sake. The quality in the final third, though, failed them time and again with a clear cut opportunity only coming in the second minute of added-on time.

Redeem Tlang had the opportunity to seal it for the Gaurs in regulation time after some good work from Devendra Murgaokar in the box had seen him played in. Redeem’s shot, from an acute angle, though, was wide of the mark.

Action heats up in extra-time

It was Mohammedan Sporting who started the brighter of the two sides in extra time and nearly got their reward in the opening minutes. Wayne Vaz had a glorious opportunity to give the Black Panthers the lead when he headed from close distance from a corner. The effort, however, was too close to Naveen Kumar who got down well to his right save.

The Gaurs started to get a grip on the proceedings from then on and finally got their vital breakthrough in the final minute of the first half of extra time.

Edu Bedia stepped up to deliver from a free-kick after Noguera was hacked down by Milan Singh close to the box. The Spaniard curling free-kick, meant for the onrushing Goan cavalry missed everyone and caught out Zothanmawia in the Mohammedan goal as it skidded off the turf and crept into the far corner to give Goa the lead.

Mohammedan pressed hard in the second half of extra time, leaving space behind for Goa to find on their attacks. The Gaurs’ lack of sharpness showed up again as they squandered the chance to seal the game once and for all.

The Black Panthers threw the kitchen sink at the Gaurs in the final minutes and one of their efforts would have brought them the coveted equaliser barring a brilliant save from Naveen Kumar. The keeper who had largely been a spectator in the game except for his one save, was called into action with only a couple of minutes left into the game.

A long ranger from Nikola Stojanovic looked to be headed to the top corner until Naveen stretched acrobatically to his left to deny the Mohammedan skipper and seal the game for FC Goa.

The win means that FC Goa becomes the fourth team from Goa to lift the trophy and the first ISL team to do so. Edu Bedia was declared the Player of the Tournament whilst Naveen Kumar bagged the Golden Glove award.