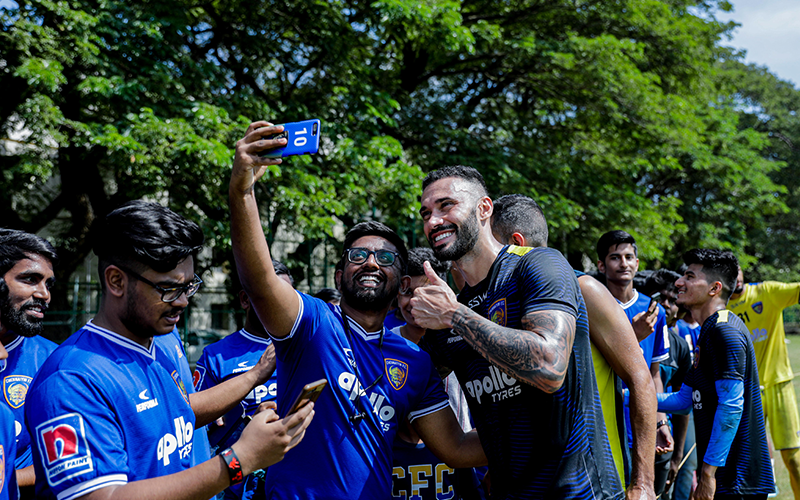 Two-time Indian Super League champions Chennaiyin FC have announced that 31-year-old defedner and Brail International Eli Sabia has extended her contract with the club for the 2020-21 season.

Experienced center-back Eli started in 19 of Chennaiyin’s 21 games last season as they put together a stunning run to the final. An eight-game unbeaten run to qualify for the semis required CFC to be resolute at the back, and Eli played an instrumental role in ensuring that with his calming and reliable presence. He also contributed at the other end with a goal and assist, the former an important strike in the 4-1 semi-final first leg win over FC Goa.

“I am delighted beyond words to continue my time at Chennaiyin FC. The love that my family and I have received from the club, fans, and the city of Chennai is unmatched. We have unfinished business from last season after we fell just short in the final. We go again in the new season with renewed hope and determination to bring a third ISL title to Chennai,” an optimistic and elated Eli Sabia said from his Santa Catarina residence in Brazil.

“Eli (Sabia) is the embodiment of hard work, determination and consistency at Chennaiyin. Along with being technically sound, Eli is a leader both on and off the pitch and the younger Indian players stand to gain a lot from him for their development. We are glad he has extended his stay with us and we look forward to him continuing to excel in Chennaiyin blue,” said CFC co-owner Vita Dani on the welcome development.

With 59 CFC appearances in all competitions to his name already, Eli is preparing for a fourth season with the Marina Arena club by focusing heavily on his fitness, currently back home in Brazil.

Eli’s first stint in Indian football was in the 2016 ISL season with Chennaiyin. Soon after, he returned to Brazil for a short spell at Sertaozinho FC before switching to Al Raed in Saudi Arabia. He then re-joined CFC ahead of the 2018-19 season and has been a mainstay in defence over the last two campaigns. A muscular and imposing presence who is comfortable on the ball, Eli was also pivotal in helping CFC keep seven clean sheets in 12 games across the AFC Cup group stage and the run to the Super Cup final during the period of March to June 2019.

Hailing from Sao Paulo, CFC’s No. 13 began his career at local club Paulista, progressing through the youth ranks before appearing for the senior team. He had several high-profile loan spells during his time at Paulista, with one of them at Swiss top division outfit FC Lausanne besides stints at Brazilian giants Santos and Athletico Paranaense.