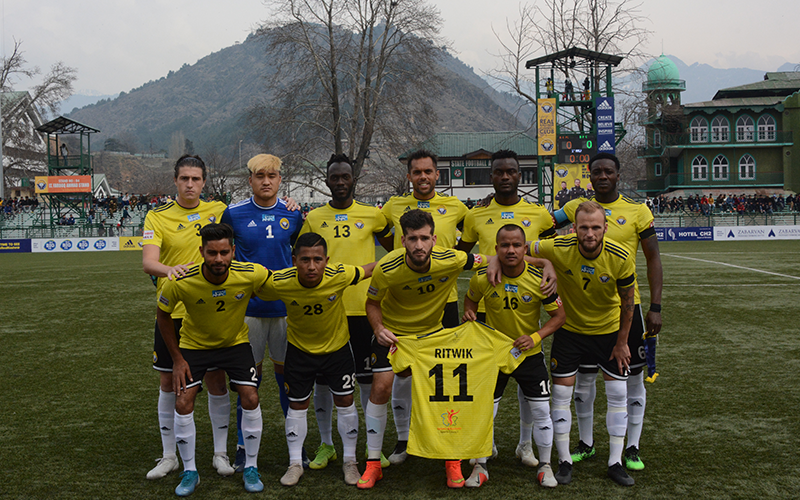 Real Kashmir Football Club notched up a 1-0 win over Neroca on a chilly Wednesday afternoon in Srinagar and just prior to the start of the game, the hosts’ heart-warming gesture for winger Ritwik Das -- who missed the match because of the unfortunate demise of his father – came in true spirit of the game.

In the team photograph, the Snow Leopards held up Ritwik's jersey as an act of solidarity while the home fans at the TRC Ground also paid their respects with a banner that read 'We are all Ritwik'.

Ritwik has been one of the standout performers for the team in the Hero I-League 2019-20 season and Head Coach David Robinson told i-league.org that it was an "emotional moment" for everyone at the club.

Local lad Danish Farooq's well-taken header gave Real Kashmir the three points and saw him being named the Hero of the Match on the day. The forward paid tribute to his "brother" Ritwik and dedicated the result to him.

"We were all shocked to hear the news. Ritwick is our brother and we are a family. Obviously, he is going through a very hard time but we are always with him,” Danish said.

Real Kashmir have been unbeaten in their last three matches with two wins and a draw -- all of which came in Srinagar. Currently sitting in third place, they will be looking to make it up the table with four further consecutive home games lined up for the Snow Leopards, beginning with a clash against Quess East Bengal on Monday.

Having played 13 out of RKFC's 14 games so far this season and registering six goals and two assists, Mason Robertson has been a crucial player for Real Kashmir. With six games to go, the league is approaching its business end. According to Mason the run of home matches will be advantageous for his side.

"Yes, I believe it’s a huge advantage for us to finish in the second spot with these home games. We have a big game against East Bengal next, so we are preparing hard to get a result because we know how good they can be," he said.

The teams in second and eighth places are separated by only four points and Danish hailed Real Kashmir's fans as the "best in the league" as the race for the spot in next season's AFC Cup gets tighter and tighter.

"We have got the best fans in the league, who support us through thick and thin. We want to give them something to cheer for and yes, we will fight to get us the spot in Asia," the 23-year-old opined.

Kolkata giants Mohun Bagan have been the runaway leaders this season in the Hero I-League and are in pole position to lift the trophy. Should certain results go their way, they could confirm their title as early as Tuesday (March 10, 2020) but a win for Real Kashmir against Mohun Bagan's famed rivals Quess East Bengal could postpone their celebrations.

The match between Real Kashmir FC and Quess East Bengal will be played at the TRC Ground in Srinagar on Monday (March 9, 2020), with kick-off scheduled for 2 pm. The action will be broadcast LIVE on 1Sports and streamed on 1Sports Facebook page and FanCode App.