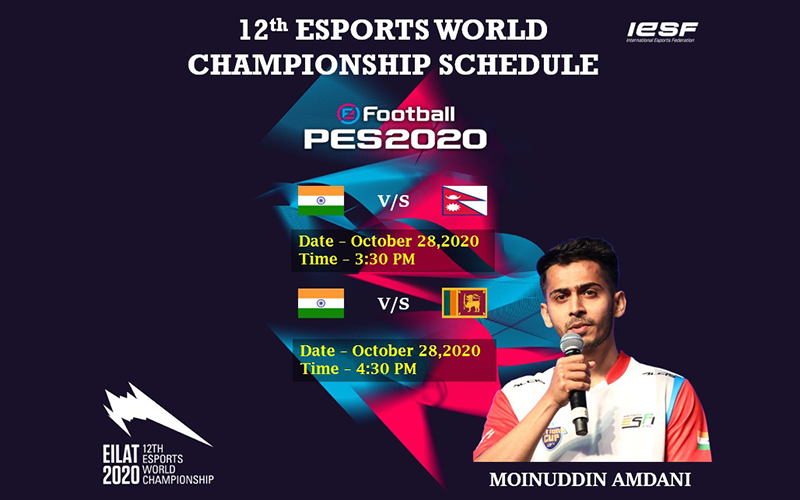 Placed in the South Asia region alongside Sri Lanka and Nepal, Amdani will start India's campaign on October 28 (tomorrow) when he takes on his opponents from Nepal and Sri Lanka at 10:30 am and 11:30 am (IST) respectively.

The matches will be streamed live on IESF’s official channels.

Moinuddin started playing in 2012. His love for football motivated him to take up this game. It was initially started as a fun-time hobby like any other gaming individual. His parents are concerned about his career and job security as not every individual turn out to be a successful professional esports player. However, he is yet to break the news about his ambition of getting into full-time video gaming and becoming an esports professional.

Not owning a PlayStation is the biggest challenge for this India No. 1. Even though he plays professionally, he still has to go to a cybercafe to play the matches as he doesn’t own a machine. He though feels Esports in India is booming but we still have that mindset of playing is a waste of time.

Amdani is targeting nothing short of a gold at the upcoming Esports World Championship in Eliat, Israel.

Runner up in PES 2017 tournament at IGX

Runner up at Nations Cup held in India

Represented India at the 2019 World Championship 2019

While he started off casually with his friends at the arcade just for fun but right after his graduation from school, he saw an advertisement for a Tekken 6 tournament and he decided to participate and soon good introduced to the Tekken community in India as well. He started joining tournaments since 2010 and during this time there weren't many tournaments happening and the community was quite a small one. With no official rules and pretty much every tournament having a different rule set all the time and unprofessional attitude at times when prize money were halved or declined-pretty much affected the growth of the game and increasing the popularity of the game.

His biggest achievement so far has been the recent one where he went to Tokyo to participate in EVO JAPAN 2020- he came 9th out of 950 participants. His other big achievements are, positioned 4th at the IESF 2018 Kaohsiung Taiwan and best performance so far in SEA Major 2018 TWT tournament was where he was placed 3rd. If we talk about India, his biggest achievements were winning all 5 of the Indian qualifiers for IESF & both the Dreamhack tournaments in Mumbai 2018 and Delhi 2019.

Tejan feels getting a sponsor in India for a game which is not that popular is really hard, he has been trying to get the sponsors attention for many years now by staying at the number 1 position in India in Tekken and even placing top 3 in international tournament but he is still without sponsors and at times even if sponsors are there Visa availability becomes an issue.

Urunkar started playing Dota 2 in 2012 with ambitions of becoming a pro DOTA 2 player. Earlier when there were very few major events and too many local cafe events, he used to go to each and every local event and win it. Gradually with the spread of the game there were a lot of major events and the local events vanished from the scene as a result.

There was no support from family when he started, he used to go to cyber cafes and practice. Parents used to be very upset with him spending so much time and money on playing games.

After watching his friends and brother playing, Shahbaz started taking interest in the game and began playing professionally in 2012. Not having PC at home as well as enough money to play regularly at cafes was a real struggle for him initially. Even though, now he has a pc, the regular power cuts and fluctuating net issues are the troublesome areas even till date.

His parents weren't exactly supportive but they wouldn't stop him from playing for few hours. Shahbaz will be a crucial cog for the team in the Finals at the 2020 Esports World Championship.

At the age of eight, Omkar started playing the game and where he only played 5vs5 lobbies back then for fun before it became a goal to go pro.

Omkar feels lot of initiatives are being taken in terms of tournaments and teams and the Esports community is at a way better position than it previously was. Most of the players are also more competitive compared to before. Lack of tournaments and lack of skills in players is still a challenge in India. But slowly the Indian community is getting together and better as a whole.

Watching people play during his regular visits to cyber cafes led him to play the game for the first time in 2013. With the time and increase of tournaments, Akshay started participating in more and more tournaments.

Convincing parents was the toughest task but when he started winning the titles and earning from it, his parents allowed him to play.

2020 World Championship will be a great opportunity for him to represent India and his pride holds no bar. This will be the first time that a DOTA team is participating and he is really very confident his own and the team’s performance.

The competitiveness and uniqueness of the game impelled him towards Esports as he was introduced to it in 2012. Amit who didn’t receive support from his family initially feels the society wasn't supportive and organisations weren't well suited for player growth. He is looking forward to this opportunity so that his world changes.

India has the potential to become the Esports powerhouse: IESF General Secretary Totovski