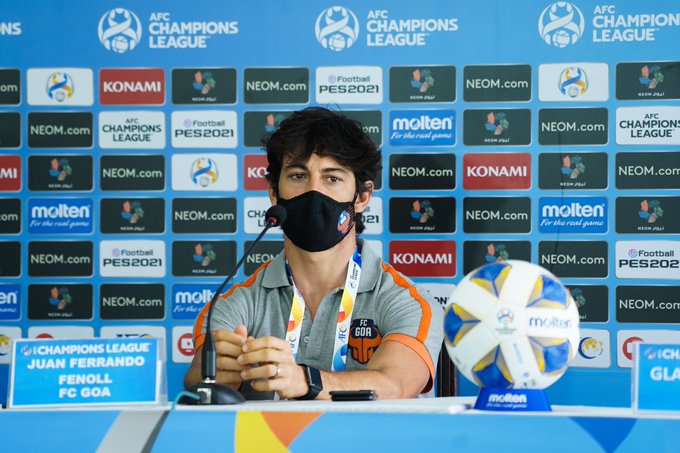 After securing a meritable draw against Qatar’s Al-Rayyan in the tournament opener, FC Goa head coach Juan Ferrando will see his wards come up against another stiff challenge – this time against UAE’s Al-Wahda on Saturday (April 17) in an 8 PM IST kick-off.

Speaking ahead of the game in the pre-match press conference, the Spaniard once again laid emphasis on the importance of playing ‘team football’ in the AFC Champions League to eke out results in the games ahead.

“It’s important we continue to work as a team. We are talking on the same lines in the dressing room,” exclaimed Ferrando. “This is the Champions League and we can’t deviate from the same. We can’t think in terms of individual details. We have to keep working at 100% because this is an important moment for the club.”

“From our point of view, football is about attack and defence. We were able to control the last game in terms of position defence. I am happy about this, but we need to improve from the sense of positional attack.

“Of course, it was our first game in the tournament and we got a result. Now we have stress on the present and future. The Al-Rayyan game now for us is in the past.

“The problem here for everybody is that you just get one day (to put your plan in place). However, it is important for our players to come out afresh in terms of the mentality because tomorrow, we have a massive game.”

The AFC Champions League is an unknown quantity for most in Indian football with FC Goa becoming the first-ever Indian team to play in the group stages of the competition. And while the task of playing against the best in the continent is a daunting task, Juan Ferrando also sees the tournament as a great learning experience.

“I think this is a good opportunity for the players because when you play six games against teams at this level, they better understand the concepts of pressing, positional attack, the timing of the press, about controlling the game and transitions,” added Ferrando.

“For us, this is a masterclass every game. For the Indian players, this will make them understand why the AFC Champions League is the biggest competition in this part of the world.”

The Spaniard also stressed the need to improve in terms of performance with each passing game in the tournament for the Gaurs.

“It is necessary to improve a lot of points because we know the quality of our squad,” added Ferrando. “For us, the most important things is to improve as a team – to control the space, not to lose the ball early when moving the ball around, the timing of the press etc. For example, in the game against Al Rayyan, we saw 2-3 players taken out of the equation because the press was not in cohesion with everyone.”

Saturday night will have the answer as to whether the Gaurs can take another step forward and improve on their performance.

After impressing all and sundry with a battling draw against Al-Rayyan, the eyes of the entire nation will again turn to Juan Ferrando and his boys on Saturday night as they seek to write another new chapter in the footballing history of both club and country.