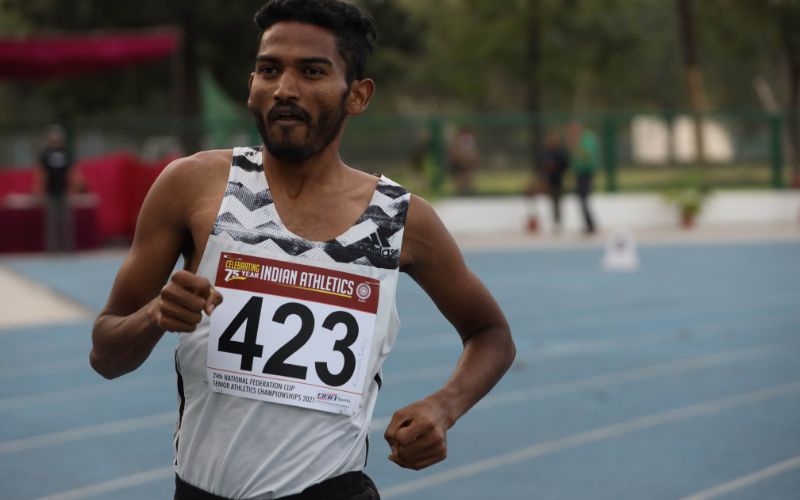 Avinash Sable (Maharashtra) paid the best possible tribute to the late coach Nikolai Snesarev posting a new National Record time of 8 minutes 20.20 seconds as he won the men's 3000m Steeplechase on the third day of the 24th National Federation Cup Senior Athletics Championships at the Netaji Subhas National Institute of Sports on Wednesday.

Along with javelin thrower Neeraj Chopra and shot putter Tajinderpal Singh Toor, Sable gave India much reason for cheer. Neeraj Chopra broke his own meet record while Tajinderpal Toor had a superb series of throws.

Sable, who set the earlier National mark at 8:21.37 in the World Championships in Doha on October 4, 2019, broke free of the pack after a lap and a half and raced the clock. Having already secured Olympic qualification, the 26-year-old was a picture of determination and confidence as he chased his target time – almost as if to honour the late Belarussian coach.

Javelin thrower Neeraj Chopra sustained his fine run of form with a massive throw over 87.80m on his final attempt which secured him a new meet record. Having raised the National record to 88.07m in the Indian Grand Prix III here on March 5, he showed a hunger for consistency and desire to embrace consistency rather than rest on his oars.

The World No. 24 was looking to join 24 others who have achieved the Olympic entry standard. At the moment, he is third on the list of eight who can qualify on the basis of their world ranking. The final two attempts on Wednesday evening showed that he is getting better outcomes for his sustained efforts.

Parul Chaudhary (Uttar Pradesh) played the waiting to game to perfection, letting Komal Jagdale (Maharashtra) set the pace but staying on her heels through the women's 3000m Steeplechase only to sprint away in the final 200m to a secure comfortable win in the end. She was also superior at the water jumps where Komal Jagdale lost some precious time.

Priyanka Kerketta (Jharkhand) came up with a final effort of 6.10m to leapfrog to gold medal past Rintu Mathew (Kerala) and Sherin Abdul Gafoor (Tamil Nadu), who both had best efforts of 6.07m each. Priyanka Kerketta, 22, was lying in the fourth spot with a best of 6.01m but her final jump pushed Telangana's Agasara Nandini out of the medal bracket.

Ankesh Chaudhary (Himachal Pradesh) won the fastest of three men's 800m semifinals, clocking 1:50.81 ahead of Krishan Kumar (Haryana) and Anu Kumar (Uttarakhand) but the with Asian Games gold medalist Manjit Singh (Haryana) in the fray, the final could see a faster time.

On Tuesday, a few days shy of his 19th birthday, Usaid Khan (Uttar Pradesh) won the tough Decathlon with 6890 points. He built a total of 3572 points on the first day with good performances in the 100m and 400m sprints to insure against the strong second day challenge of Navjor Singh (Punjab). By improving his throwing, Usaid Khan can aspire to rise as an Asian Games prospect.