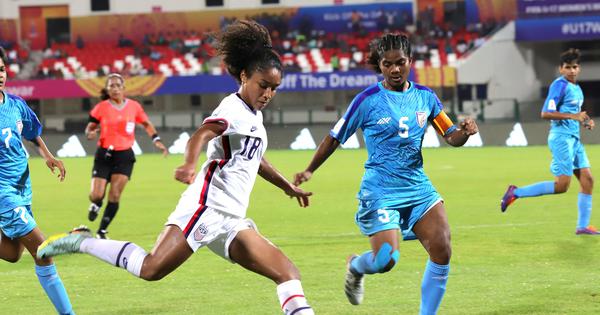 The Indian women’s football team suffered its biggest defeat in Under-17 age-group football after losing 8-0 against the USA in its first Group A match of the FIFA U-17 Women’s World Cup 2022 at the Kalinga Stadium in Bhubaneswar on Tuesday.

The hammering put India at the bottom of Group A while the USA sit pretty at the top of the points table. Brazil, meanwhile, eked out a narrow 1-0 win over Morocco in the other Group A match and are in second place.

A World Cup debut to forget for the young tigresses ☹️ pic.twitter.com/IUnbLBvHDS

It was also the USA’s biggest win at the FIFA U-17 Women’s World Cup.

India absorbed the pressure in the first few minutes and made their own counter-attacking foray through midfielder Nitu Linda and forward Neha in the third minute. However, it remained India’s only high point in the first 15 minutes as speedy American full-backs created multiple chances for the USA.

In the ninth minute, USA’s Melina Rebimbas, unmarked, hit a perfect volley from the centre of the box after latching onto a precise cross from Riley Jackson from the right.

Jackson provided her second assist from the corner five minutes later with another sublime cross. Charlotte Kohler rose above the Indian defenders and netted the header from close range.

In the 16th minute, India earned their only corner of the first half but Neha's delivery inside the box failed to get an Indian touch and the ball eventually went out for a throw-in.

The USA, who came into the match having scored 58 goals and conceded only once during their CONCACAF qualifiers, played some free-flowing football and scored three more goals in the remainder of the first half.

The misery continued for India with a failed clearance in the 31st minute from Indian defenders falling to Rebimbas, who placed it neatly in the top corner.

Gisele Thompson made it 5-0 after beating the Indian goalkeeper with a left-footed shot in the 38th minute.

At the end of the first half, the USA dominated 73 percent of possession and had seven shots on goal compared to none from India.

Indian coach Thomas Dennerby made three substitutions at the start of the second-half but couldn’t stop the American rampage.

The USA’s Ella Emri, Taylor Suarez and captain Mia Bhuta scored a goal each in the second-half despite India committing the numbers in defence.

India will next face Morocco in their second group match on Friday. A clash against Brazil follows on October 17.