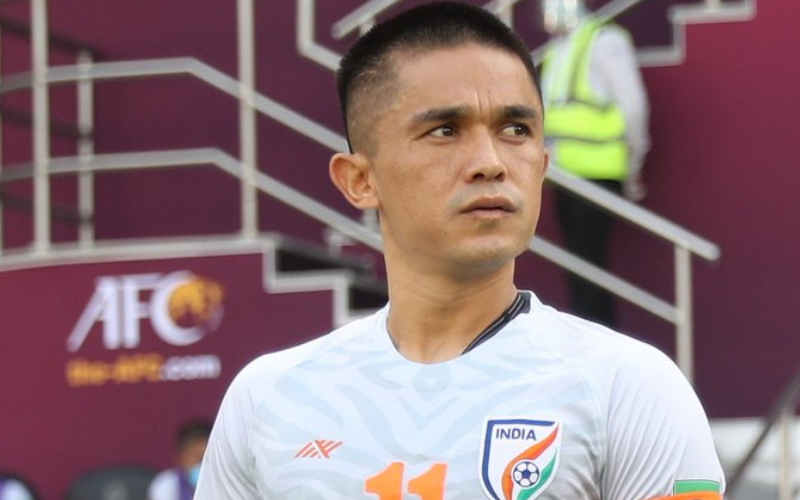 Sunil Chhetri scored a second half brace to lift enormous pressure off the shoulders of Blue Tiger's boss Igor Štimac.

India rode on a Sunil Chhetri brace to beat Bangladesh 2-0 in the FIFA World Cup Qatar 2022, and AFC Asian Cup China 2023 preliminary joint round qualification round at the Jassim Bin Hamad Stadium, Doha.

Courtesy the result, India moved to six points from seven matches, while Bangladesh are at two points seven matches. India next play Afghanistan in their last group league match on June 15.

Sunil broke the deadlock in the 78th minute when he headed in Ashique Kuruniyan’s cross from the left. He then sealed the result by curling in a shot from long range in added time, to win the match 2-0 for the Blue Tigers.

Stimac made three changes from the side that took on Qatar in the last match. The Blue Tigers made a cautious start, playing it amongst themselves, searching for the gaps.

In the 2nd minute, Rakib Hossain was flashed the yellow for a tackle on Brandon Fernandes. Brandon tried to be in the thick of action in his effort to essay those passes, and find someone in the clear.

India earned their first corner in the 9th minute, but the first real chance came in the 15th minute when Brandon’s through ball played between the two central defenders found Manvir Singh in the clear inside the box.

With only the rival goalkeeper Anisur Rahaman to beat, Manvir was a bit shy to have a try, and delayed it that shade too long allowing the rival defence to regroup.

In the next minute, Suresh Singh got into the box but his centre was collected by a diving Anisur.

Bangladesh’s Rahmat Mia was shown the yellow card for his foul on Suresh in the 32nd minute.

Bangladesh had a close shave in the 35th minute when Chinglensana Singh’s header off a Brandon corner was cleared on the line by Riyadul Hasan.

Changing over, Mohammed Yasir came in for Udanta Singh, and Ashique Kuruniyan replaced Bipin in the 46th minute.

In the 56th minute, Sandesh did leap more than all to head Brandon’d corner but it didn’t pose any danger, and then two minutes later, Sunil received a pass form Brandon on the edge of the box and out Yasir to pull the trigger. Yasir delayed a bit, and the rival defence were able to thwart it off.

On the hour mark, India brought in their third substitute – Liston Colaco coming in for Manvir Singh.

Almost immediately, rival captain Jamal Bhuyan was flashed the yellow after Suresh had sped past him on the right flank. Off the resultant free-kick, Brandon did manage to find an unmarked Sunil Chhetri in the box but his header was off target.

Glan’s long-range effort won India a corner in the 73rd when it deflected off a rival defender over the goal-line. But India’s agony continued as Subhashish Bose, all unmarked, failed to guide his header into the goal – it sailed past the post.

A minute later Asahique was shown the yellow card for his foul on Riyadul.

India finally was able to break the deadlock, and it was none other than Sunil Chhetri, on the 79th minute, who connected with an Ashique cross from an acute angle to send the ball back across Bangladesh goalkeeper Anisur Rahman.

Bangladesh began to throw bodies forward in search of the equaliser, but were often thwarted by the Indian defence. Jamal Bhuyian went into the referee’s books a minute after Chhetri’s goal, for a foul on Brandon Fernandes.

Stimac made a couple of tactical changes in order to hold on to the lead in added time, as Pronay Halder and Adil Khan replaced Chinglensana Singh and Brandon Fernandes, respectively.

However, captain Sunil Chhetri sealed the three points for the Blue Tigers, as he collected a pass from the left by Suresh, outside the Bangladesh area, and curled it into the back of the net.