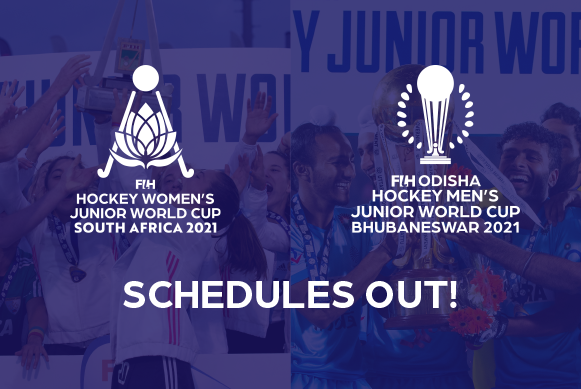 The International Hockey Federation has revealed the pools (four groups of four teams each) and match schedules of both upcoming FIH Hockey Junior World Cups, Men’s and Women’s.

The opening match of the FIH Odisha Hockey Men's Junior World Cup Bhubaneswar 2021 will oppose Belgium to South Africa on 24 November at the Kalinga Stadium, the outstanding venue which hosted the last FIH Men’s Hockey World Cup in 2018. The Final will be played on 5 December.

Defending champions India will open their campaign against France on the first day of the FIH Junior Men’s Hockey World Cup on November 24, to be held at the Kalinga Stadium in Bhubaneswar.

India have been placed in a relatively easy Pool B alongside Canada, France and Poland. Pool A consists of Belgium, Chile, Malaysia and South Africa, while Korea, Netherlands, Spain and Uinited States are in Pool C. Argentina, Egypt, Germany and Pakistan are in Pool D.

Besides the India-France game, the other matches of the opening day are Belgium-South Africa, Malaysia-Chile, Germany-Pakistan and Canada-Poland.

The pool for the showpiece at the junior level was announced by the International Hockey Federation on Wednesday.

After France, India will take on Canada on November 25 followed by a match against Poland on November 27. The semifinals and the final will be played on December 3 and 5 respectively.

Poland has come in as a replacement team for England who withdrew from the tournament due to travel issues amid the Covid-19 pandemic.

The FIH also released the pools and match schedules of Women’s Junior World Cup to be played in Potchefstroom, South Africa from December 5 to 16.

The Indian team is placed in Pool C in this event alongside title holders Argentina, Japan and Russia.

The Indians will open their campaign against Russia on December 6, followed by matches against Argentina (December 7) and Japan (December 9).

Following England’s withdrawal, Poland will join the event and play in Pool B alongside the hosts and title holders, India, as well as Canada and France.

Whilst the Men will close the action in India, the FIH Hockey Women's Junior World Cup South Africa 2021 will start with an opening match involving Ireland and Zimbabwe at the North-West University (NWU) of the academic city of Potchefstroom, situated approximately 120 km west-southwest of Johannesburg. The Final is scheduled on 16 December (see full match schedule here).

The hosts, South Africa, will play in Pool D with Germany, Spain and USA, while the title holders Argentina will join India, Japan and Russia in Pool C.