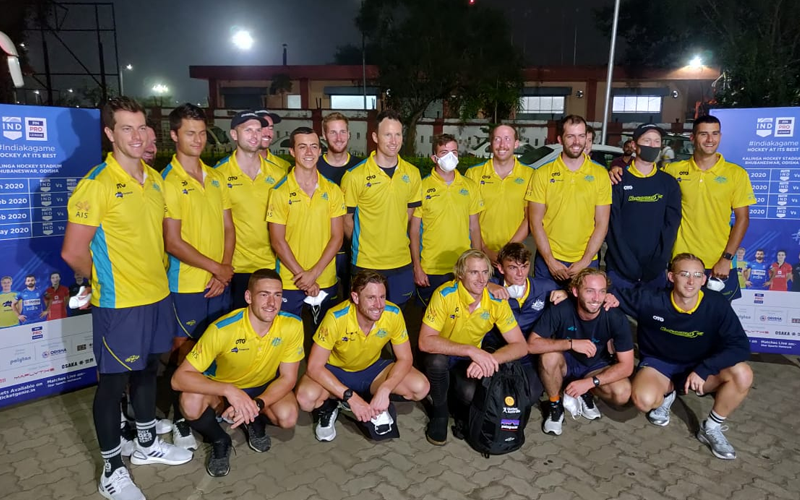 After bouncing back from two defeats against Belgium with two victories over Great Britain in the second edition of the FIH Hockey Pro League, the World No. 2 Australia Hockey Team arrived in Bhubaneswar on Sunday night to face World No. 4 Indian Men's Hockey Team in two gruelling encounters of the competition which take place on 21st and 22nd February 2020 at the Kalinga Hockey Stadium.

The Australian Captain Aran Zalewski, arrived in the Temple City looking to utilize their two FIH Hockey Pro League matches against hosts India as preparation in an Olympic year.

"I think it serves us as good preparation to be facing India away from home in this important Olympic year. The Indian team has also done well so far, so we're looking forward to playing them here. We also have a week to prepare for the matches, so we're hoping we can acclimatize with the conditions and put up a strong show on the weekend," said the Midfielder.

The Defending Champions' Coach Colin Batch commented on playing at the Kalinga Stadium. He said, "We're delighted to be back here in Bhubaneswar to face the Indian team. It's been a mixed start for us in the Pro League so far, but we're hoping to face a tough fight against the hosts. Also looking forward to playing in a noisy, full crowd at the Kalinga Stadium."

India will take on Australia on 21st and 22nd February at 1900hrs IST at the Kalinga Hockey Stadium in Bhubaneswar.

For the FIH Hockey Pro League 2020, tickets are available online at
https://in.ticketgenie.in/Tickets/FIH-Hockey-Pro-League-2020

Please find below the outlets which will be selling the tickets for FIH Hockey Pro League 2020:

Matches will be live on: