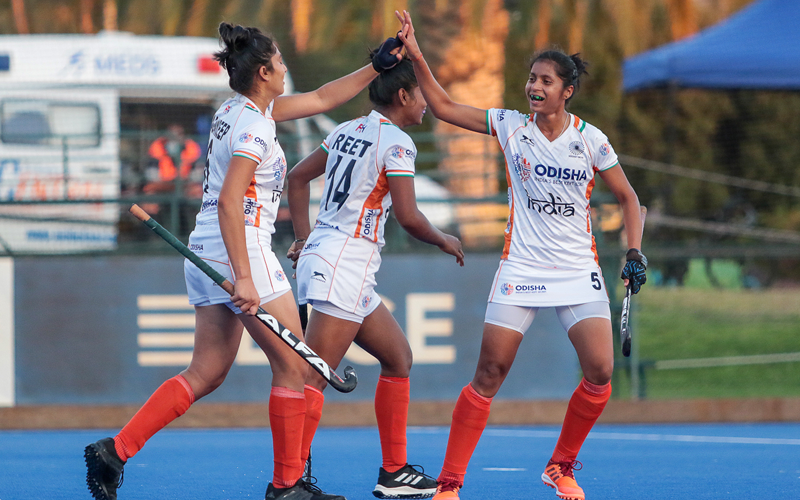 An inspiring performance in the last quarter of the match saw the Indian Junior Women's Hockey Team score thrice inside the last nine minutes to register a 4-2 win over the Chile Junior Women's Hockey team here at the Prince of Wales Country Club on Monday evening. A brace from Gagandeep Kaur (51', 59'), and a goal each from Forwards Mumtaz Khan (21') and Sangita Kumari (53') ensured India's victory after goals from Amanda Martinez (4') and Dominga Luders (41') had put Chile ahead.

The match started with Chile putting pressure on the Indian defence and earning themselves a Penalty Corner in the 4th minute, which was converted by Amanda Martinez to give her side the lead. India tried to fight back into the match and their resurgence paid off in the 21st minute when striker Mumtaz Khan found herself in a fantastic position in front of goal, and produced an exquisite finish to score India's equalizer. Both teams tried to look for opportunities to score and get a lead in the match, but neither could find an opening until the half-time break.

In the 3rd quarter, it was Chile who started on the front foot, and earned themselves a Penalty Corner in the 31st minute. However, the resulting execution was well defended by the Indian team to deny the hosts. Another glorious opportunity came for Chile ten minutes later as Dominga Luders found herself through on goal, but this time she did not hesitate in shooting past India's Goalkeeper to make it 2-1 in Chile's favour.

However, playing under the pressure of trailing by a goal, the Indian team produced a scintillating performance in the last quarter of the match by scoring thrice inside the last nine minutes, and bagging a come-from-behind 4-2 victory against their hosts. Two Penalty Corner goals from Gagandeep Kaur in the 51st and 59th minutes, and one goal from Sangita Kumari in the 53rd minute gave India a well-deserved win in the second match of their Tour of Chile.