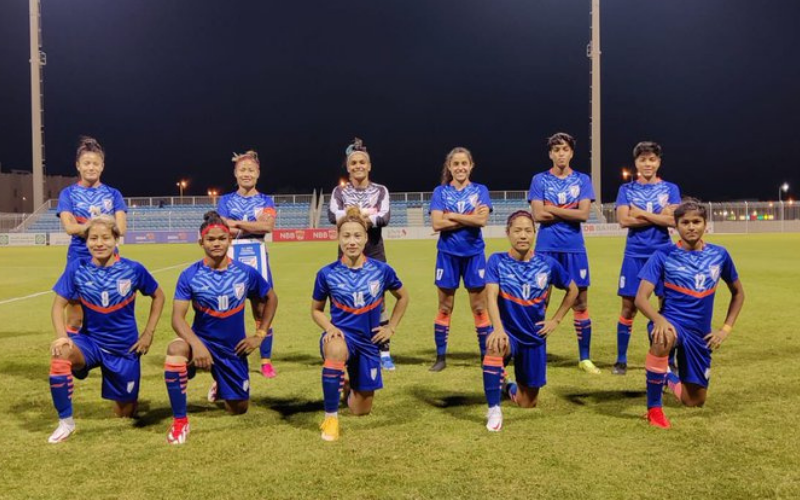 Five-star performance for Indian Eves as they sweep Bahrain aside

Five-star Indian Eves breezed past Bahrain with a superb 5-0 victory.

A brace from from Pyari Xaxa followed goals in either half from Sangita Basfore, Indumathi Kathiresan and Manisha Kalyan as Indian Women's Football Team earned an emphatic 5-0 win over Bahrain in an international friendly.

Thomas Dennerby's girls sent out a strong message with this astounding victory after the heart-wrenching 0-1 defeat against Tunisia in their previous friendly in the UAE.

India did not delay on showing their intent right from the get-go when Anju missed the target from a corner in the 4th minute. Two minutes later, Pyari missed a chance after being fed a cross by Dalima Chhibber.

They didn't need to wait for too long to break the deadlock as Sangita provided them with an early lead in the 13th minute. Six minutes later, Pyari made amends of her previous miss to double the lead.

Skipper Ashalata also tried her luck from a free-kick, but she couldn't manage to hit the back of the net on the night.

Ranjana Chanu, Dangmei Grace, and Pyari kept the Bahrain defence on their toes throughout and finally, Indumathi joined the party after the half-hour mark.

India dominated in every department to hold on to a 3-0 lead at the end of the first half.

Within a few seconds, Manisha fired in the fifth goal of the night, which put the match well beyond the hosts.

Pyari got her marching orders 17 minutes from the end of the regulation whistle, but Bahrain could not utilise the numerical advantage and the scoreline remained unchanged till the end.

The Indian Women’s Team will now proceed to play Chinese Taipei in their next friendly match on October 13, 2021 at 8.30 PM IST.