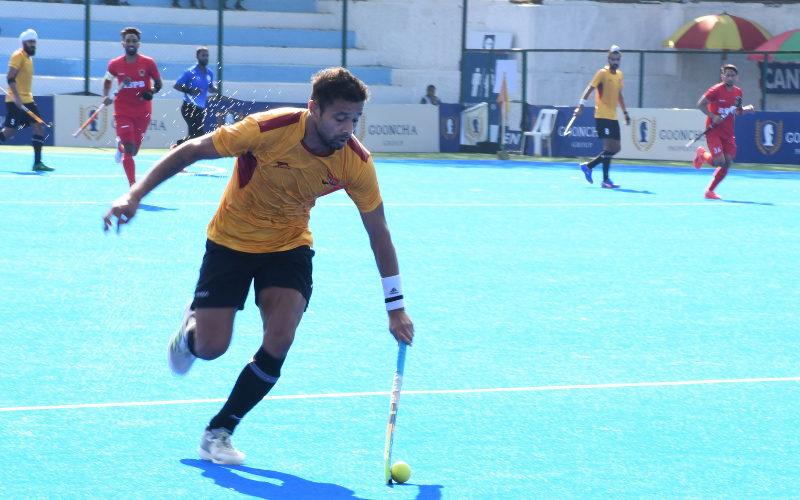 The first semi-final of the 'Gooncha 57th Nehru Senior Hockey Tournament', being hosted at the SCR Sports Complex, Secunderabad, was played between the winner from Pool 'A' Indian Oil and the runner-up from Pool 'B' Indian Navy. The tournament favourite Indian Oil beat spirited Indian Navy during regulation time and moved into finals to be played tomorrow.

Indian Navy, the underdogs who rose from the ranks by qualifying in both the knock out and the league stage, opened their account in the first quarter with a field goal netted by Jugraj Singh, one of the best goals scored in the tournament, in the 12th minute. Another field goal was added in the seconds quarter by Kuldeep in the 20th minute and Indian Navy went for half time with a comfortable 2-0 lead. In the second half, Indian Navy continued to exert pressure on the Indian Oil defence, but it was Manpreet Singh who brought Indian Oil into contention in the third quarter with a field goal in the 42nd minute. Later in the fourth quarter Talwinder Singh equalised the score for Indian Oil, through a field goal in the 48th minute. With both the teams remaining 2-2 at the end of game, the match had to be extended into regulation time for a shoot-out, to decide the winner.

The star studded India Oil with two Olympians and four World cup players in its ranks, has an enviable legacy in this Tournament, they won the cup 5 times, never been a runner up, they won every time they made it to finals. This is their 6th entry into the finals and an exciting finish to the tournament is on the cards.

Indian Railways chugs into the final for a face-off with Indian Oil, at the 'Gooncha 57th Nehru Senior Hockey Tournament'!

Hyderabad, November 22nd, 2021: In the semi-final match between Pool 'B' winner Indian Railways and Pool 'A' runner-up Punjab National Bank, at the 'Gooncha 57th Nehru Senior Hockey Tournament', being hosted at the SCR Sports Complex, Secunderabad; Indian Railways overwhelmed PNB by 4-0 and set up an exciting final with Indian Oil, tomorrow.