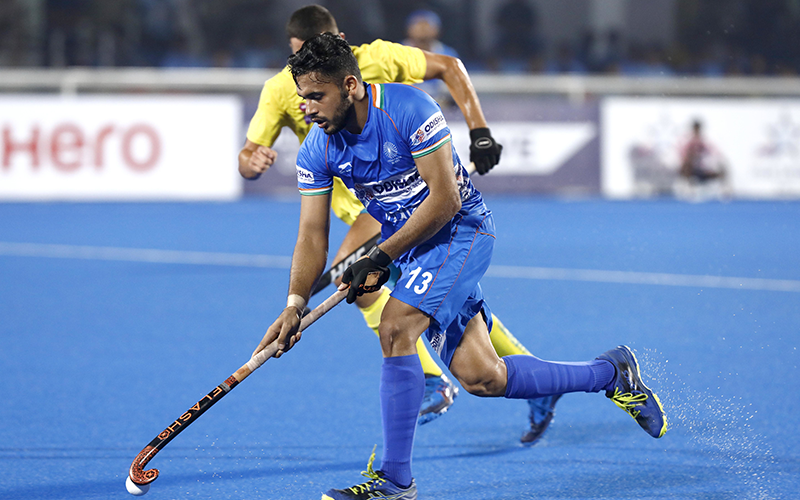 Focus is on our first match on 25th July at the Tokyo Olympics, says India's ace defender Harmanpreet Singh

The Indian Men's Hockey Team star defender Harmanpreet Singh, who played a lead role in India’s defense during the FIH Series Final 2019 as well as the FIH Olympic Qualifiers 2019 in Bhubaneswar, was presented with the Hockey India Pargat Singh Award for Defender of the Year 2019 at the 3rd edition of the Hockey India Annual Awards held in New Delhi on Sunday, 08 March 2020.

The 24-year-old expressed that the Indian team is currently focussing on improving on certain areas during their training sessions.

"We started this camp with a focus on certain areas that needed improvement, especially converting our attack from the 25-yard line to successful circle penetrations. Tackling is also another area that needs improvement. We have a good support system around us here at the Sports Authority of India campus and our focus is currently on the first match we will play on 25th July at the Tokyo Olympics against New Zealand," said the Defender.

Harmanpreet added that the side undergoes two sessions, namely red and green. The team focusses on high-intensity practice in one session and the other session is focussed on skill improvement.

"We have red sessions and green sessions. The red sessions are mostly high in intensity and we play matches among ourselves. The sessions are usually in the afternoon at 12 pm, which is planned in order to get used to the hot and humid conditions that await us in Tokyo. We focus on our skill improvement during the green sessions," said the 24-year-old.

When asked about the precautions taken for the coronavirus disease, Harmanpreet said that the Indian team is taking the necessary measures to continue practising in a safe environment.

"We have all been asked to take certain basic precautions like washing our hands regularly and our temperature is checked regularly. We have been asked to avoid going out of the campus. We usually would step out on weekends for coffee or dinner but from this weekend onwards, we won't be going out anywhere. Also, no outsider is allowed inside the Sports Authority of India campus and SAI staffers are also checked if they have fever or cold, before they enter the gate," signed off Harmanpreet.

Can Indian Hockey return to its former glory?