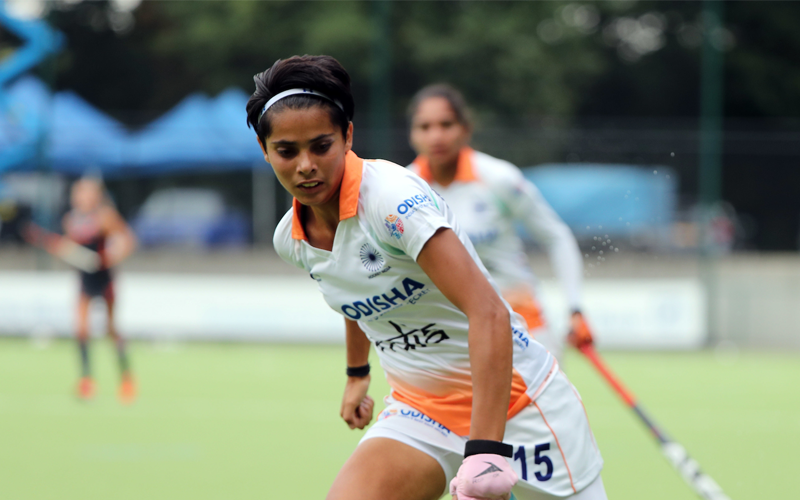 From being on the verge of quitting the sport, Indian Junior Women's Mahima Choudhary reinvigorated her young career

The Defender from Sonipat, who was finding it difficult in her early years, stayed determined in her approach to become one of India's finest Junior players.

Indian Junior Women's Hockey team's young Defender Mahima Choudhary's journey to the Junior Team set-up has not been a straight forward one. The 20-year-old was once on the verge of quitting the sport for further studies because she was not getting picked for even her state side. However, patience and determination, along with support from her parents saw her keep at it, and eventually become one of India's finest Junior players in defense.

Speaking from her home in Sonipat, Haryana, the youngster reflected on her initial days. "When I look back, the only thing that stands out for me is that I have had times when I would think about giving up the sport because I wasn't getting selected into the state Junior team. Having started playing hockey in 2011, I ended up playing in four Hockey India Sub-Junior National Championships before I finally received my Junior team call-up from Haryana. I had waited for that opportunity for more than four years and there were times I would think about quitting the sport because I wasn't progressing in my career. It was more difficult because my family had shifted to Sonipat especially because of me, and I knew there was a lot riding on my shoulders so I would feel demotivated often," said the youngster, whose family is native of a small village named Kalsi in Uttar Pradesh.

"However, my parents never lost faith in me and asked me to keep working hard, which eventually helped as I represented my state in the 5th Hockey India Junior National Championship 2015 which was held in Chhattisgarh. That was a turning point in my career because we ended up winning the Gold Medal, and I had some good performances. Maybe if that tournament hadn't happened for me, I would've been pursuing something else at this moment in my life," added Mahima, who went on to receive a call-up to the Junior India Camp after that tournament.

Another turning point that Mahima recalls is the fact that her love affair with hockey started when she had bunked an English lecture because she hadn't finished her homework, and went on to play the sport with some classmates to avoid punishment. That was the first time the young Midfielder had picked up a hockey stick. "I was only 10 years old back then and was in 6th standard in Saharanpur, Uttar Pradesh where my family used to live back then. It was one of those days when I hadn't completed my English homework, and a friend offered me a place in the hockey team, so I thought it was a great opportunity for me to avoid punishment (laughs)," she said.

"I didn't realize then that I would go on to play the sport professionally. I used to play judo before that, so it was also a good opportunity to start a new sport, and when I played hockey, it felt really nice and I thought to myself that I could really pursue the sport so our family decided to shift to Sonipat for me to join an academy," added Choudhary, who started her career under former India Women's Captain Pritam Siwach.

Now, at the age of 20, Mahima has been on the brink of being called up for the Senior National Camp, and reckons her first tour with the Indian Junior team was a real boost. "After getting a call-up to the National Camp, I got the opportunity to play in the 5 Nations International Junior Hockey Tournament in Spain. That was a real boost for me because it gave me confidence and belief in my abilities. Once I started playing regularly, and was part of the team that also won the Bronze Medal at the U18 Asia Cup in Thailand later that year, it became a priority for me to make it to the Senior team," added Mahima, who is the eldest of four siblings.