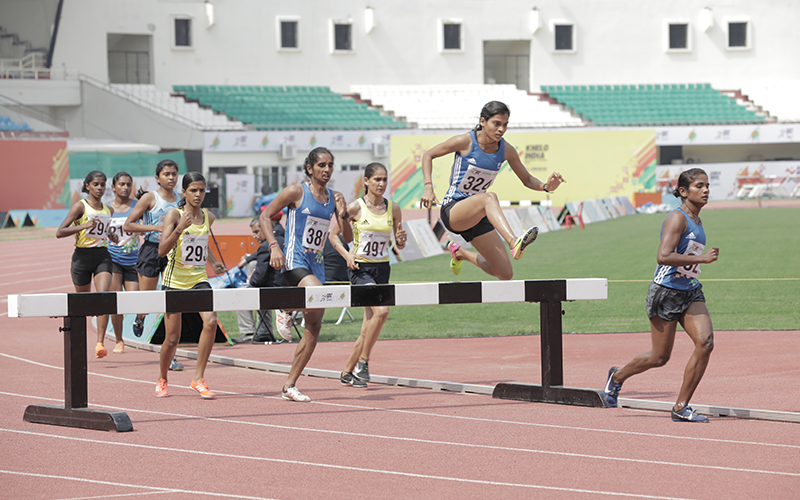 With two laps still to go, everyone watching the 3000m women’s steeplechase, was fairly certain that the earlier record was going to tumble.

After all, favourite Komal Chandrakant Jagadale of Savitribhai Phule Pune University, had not only broken away from the rest of the field but was also ahead of the clock at that stage.

Nonetheless, her teammates in the stands, including 5000m gold medallist and record-breaker Narendra Pratap Singh, felt obliged to point out the obvious, imploring her to keep going.

“The record is yours,” they screamed. “Just try and lower it so much that it stays yours for a long while.”

And Komal did just that. Her time of 10:26:63 bettered Bhagath Sheetal Jamaji’s record set in 2018 by over eight seconds.

Her teammates were clearly happy, but on the sidelines, her coach Vijendra Singh, wasn’t entirely satisfied. He promptly chided her technique when tackling the water hurdle.

“You were not focussing fully,” Singh said, “A few times it looked like a standing long jump.”

A 2nd year BA student at the Bhonsla Military College, Komal has been training under Vijendra Singh for two years now.

Much before she shifted to this event though, during her childhood, in fact, she was a short distance runner who enjoyed the sprints.

“I started running as a kid, and used to do the 100m, then the 200m, and for some reason the distances kept getting longer as I grew up,” she explained.

Growing up in a farming family in the village of Adhiv in Pandharpur district of Maharashtra, Komal’s childhood dreams revolved not much around athletic prowess as much as it did around basic sustenance.

Running was a sport as much as a daily necessity. She travelled large distances on a daily basis just to fetch supplies or water, or indeed just to help her father in the fields.

Vijendra spotted her at a district meet two years ago, and called her in for a trial. She surprised him with her brilliance and soon enough he was ironing out ‘minor issues’ that started improving her timings. Even her younger sister, Pallavi is at the facility now and is an endurance runner herself.

“More than the minor details, it is the quality of training that I get now. I get to train every day and have a fixed routine,” she said. “There are no holidays, no days off, no days when you can simply take off because you don’t feel like it.”

She hasn’t been back home for over a year now, a fact Vijendra confirmed. “I’ll go home with a medal I can really be proud of, one I’ve won for India,” she smiled. “It will be justification for the long absence.”