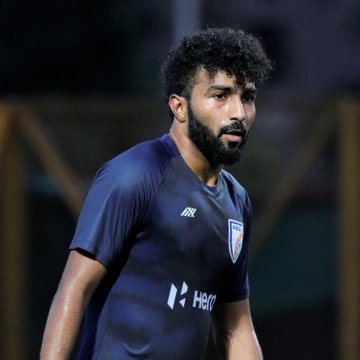 Glan Martins: 'I am working to build up my strength'

The monsoon in Goa this season made Glan Martins rediscover an old passion – cycling. In the mornings, even as the rest of Goa hadn’t awakened, Glan was off as early as 5.45 am with his cycle.

The ride from his village Velaso Pale to the nearby mountain top and back took him a little over two hours. “The view from the top of the mountain is pure bliss. During the monsoon, it’s all green. The changing colours of the sky reflecting on the sea made me a bit philosophical at times. I generally used to cycle alone, though on certain days my friends joined me,” Glan says. “Cycling up and down the slope helped me tone myself further. The view was just a bonus.”

“I have understood that I need to build more on my strength -- I need to be muscular. Coach Stimac always keeps mentioning it to us. I am working out in the gym and even on my diet to build more muscles and strength.”

Glan made his International debut against Qatar in the FIFA World Cup Qatar 2022 Qualifiers earlier this June. “At the International level, it is played at an extremely fast pace. You don’t get much time on the ball, or shall I say – you don’t get any time at all. Under such circumstances decision-making becomes immensely crucial, your time on the ball, evading your marker and then passing,” Glan quips.

From across the table, you get a view of his hair from close -- big, curly, and that wet look. His infectious smile strikes you further.

“As you can see, it’s no more that big. I have trimmed it,” he grins. “I had decided before that I will trim it when I go back home. It will grow to its normal size by the time we go into the bubble again,” he glides his fingers through his hair as he smiles again.

‘From when do you have this hairstyle?’

“In school, it could have never happened. It was during the Academy days that I began to grow it big. I have always had a weakness for big hair,” he murmurs. “But it comes at a price. I need to groom it regularly and apply all the creams and the gel. It takes quite a bit of a time,” Glan informs.

At the ongoing National camp, Glan is an epitome of concentration. “Today, I am more confident as a player but I need to be a bit more attacking in the final third,” he quips, as he looks out of the window and stares at the majestic VYBK Stadium.

“Isn't the stadium majestic? Or is the view of it from our rooms more majestic?” Glan turns to you. “The facilities here in Kolkata are just awesome. Where else in India can you walk to your training ground from the team hotel. Here we don’t need to cross any road, wait for any traffic. It’s such fun to be walking to the training pitch,” he smiles again.

“The focus among the players has already shifted to not just the Friendlies against Nepal but the bigger aim – gaining a qualification to the AFC Asian Cup China 2023. We are taking it step-by-step, match-by-match.”

In a first, Indian women’s football team to play against World No.7 Brazil in international tourney

Goa hit back to draw against Mumbai in six-goal thriller