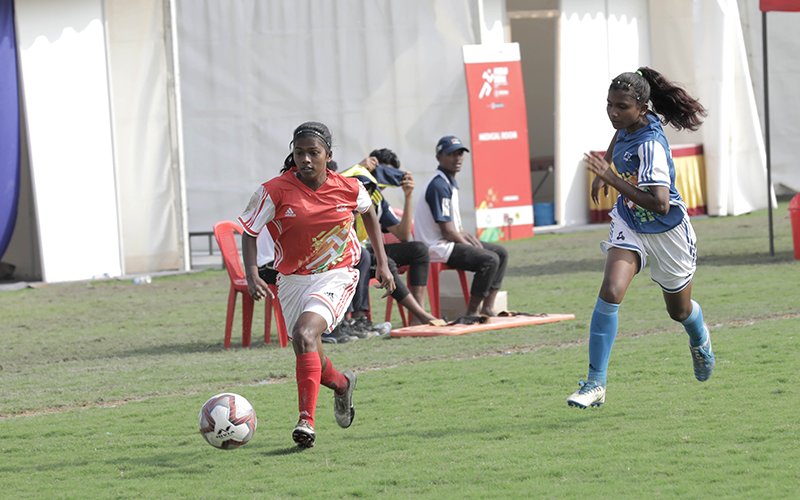 With the game locked in a stalemate, after over an hour’s play, Goa University’s bench and support staff had every reason to be anxious. They may have been favourites but they were also up against hosts KIIT, and it seemed one goal was all it would take to decide the encounter.

Their head coach, Giridevi Desai, though was calmness personified. After all she knew that the Goa University women’s team had a trump card few others could boast of, a striker of such prodigious talent that few would contest her claim to being the best player on the pitch at the Khelo India University Games 2020 in Bhubaneswar.

And sure enough, when Goa University broke the deadlock, their trump card, Karishma Shirvoikar, was involved heavily in the move. Not soon after, Karishma got herself on the scoresheet too, eventually scoring four goals in a rout of the host team.

Shirvoikar started playing football at Our Lady of the Rosary Higher Secondary School when she was in Class V. “All the boys around me used to play football, and as a kid I was just naturally curious to play sport,” she revealed, “so I played with them, wherever possible.”

Her talent was obvious and she was fast-tracked first through the school teams, then the state teams before dominating at the age group levels. In 2019, she played for Panjim Footballers in the Indian Women’s League and despite the team winning a single game in the season, Karishma’s performance in front of the goal caught attention.

Sure enough, for this season’s IWL she was drafted in by Gokulam Kerala, who went on to become champions. “It was a massive jump for me, playing with so many senior players, who have so much experience at the national level,” she confessed.

Her starts were limited in the season, courtesy Gokulam roping in Nepali striker Sabitra Bhandari to lead their lines. In the three games she did play though Karishma scored 4 goals, and bagged a hat-trick against Kenkre FC.

“Playing with Sabitra was a huge learning experience,” she said. “Her positioning, her movement, her physicality, it was great for me to watch and learn. Now, here with my Goa team I am passing on that knowledge.”

Unknown to her, she is already being sized up for bigger things. Karishma was scouted and picked for a training stint with Palamos CF in Spain earlier this year. The hope is that the club will subsequently arrange a trial for her with CD Fontsanta Fatjo, a professional women's team currently playing in the third division in the country. It is a huge step for someone so young, and yet not unwarranted.

“Karishma is obviously a very good player. And opportunities to play more games will make her much better. For that the Khelo India University Games must be thanked,” Desai says, "Giving athletes game time is very important. For a lot of these girls, time on the pitch is a rarity and therefore very valuable. It will help them in the long run.”