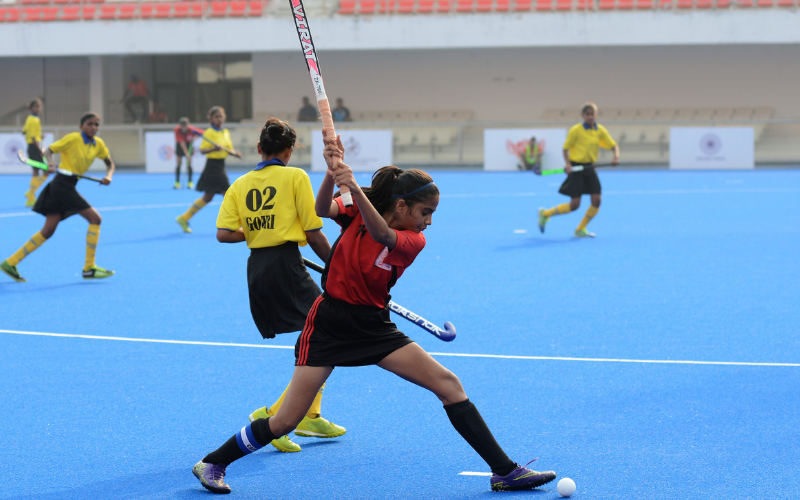 After suffering a 13-0 defeat on the opening day, Mumbai Schools Sports Association bounced back in convincing fashion to claim a 7-0 win against Dhyan Chand Hockey Academy in the first match of the second day. Hetal Goswami (12', 15', 45') bagged a hat-trick while Madhavi Mhatre (8', 13') scored two goals in their Pool A match. Captain Apoorva Rana (10') and Sanjana Salunkhe (25') also scored a goal each.

In another Pool A match of the day, SAI- Academy eased past Roundglass Punjab Hockey Club Academy with a 5-0 win. Captain Sonam (2', 22') and Sunelita Toppo (11', 25') scored a brace each while Kirti (7') scored one goal to help SAI-Academy start their campaign on a winning note.

In Pool B, Odisha Naval Tata Hockey High Performance Centre registered their second consecutive win of the tournament, beating Jai Bharat Hockey Academy 8-0 in what was the third match of the day. Captain Munmuni Das (16', 56'), Elani Tuti (22', 37') bagged two goals each whereas Ashima Rout (2'), Babyrani Sandam (9'), Priya Toppo (34') and Supriya Kuju (50') also chipped in with one goal each.

Having played a hard-fought 3-3 draw yesterday, Olympian Vivek Singh Hockey Academy finally registered their first win of the tournament as they outclassed Tamil Nadu Hockey Academy by a resounding 11-0 margin in the final match of the day. Payal Sonkar (5', 24', 60') and Pritee Sharma (21', 22', 28') each registered hat-tricks to their name while Pragya Patel (26', 30') netted twice in the Pool B encounter. Manisha Patel (13'), Captain Samiksha Yadav (57'), and Akanksha Pal (40') also managed to get their names on the scoresheet for their team Olympian Vivek Singh Hockey Academy.