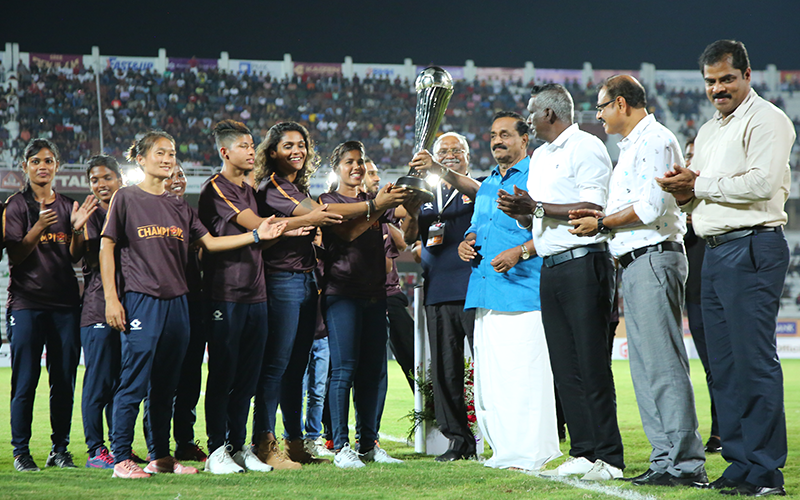 Even as Gokulam Kerala FC and Punjab FC played out an entertaining 1-1 draw in the Hero I-League 2019-20 the other day, the loudest cheers at the EMC Corporation Stadium in Kozhikode, though, were reserved for Gokulam Kerala FC’s women's team as the newly-crowned Hero Indian Women's League champions were felicitated in a glittering, first-of-a-kind ceremony.

On February 14, 2020, Gokulam Kerala lifted the Hero IWL 2019-20 crown after defeating KRYPHSA FC 3-2 in the final in Bengaluru. The champions of India were coronated in a rapturous affair in front of their home fans and according to Gokulam Gopalan, Chairman of the Sree Gokulam Group of Companies, the club wanted to give the champions a "special feeling.”

"Our women's team players have earned the felicitation. They are the champions of India. It is no small feat. We don’t want to differentiate between women and men and this is one of the reasons we fielded a women’s team in the tournament,” Gopalan stated.

"We believe in gender equality and we gave them the same facilities of the men’s team. So when they won the championship, we decided to felicitate them in front of our home supporters. This will make them feel special and being champions they should have that feeling."

Gopalan added that the ceremony will also help give a boost to the women's game. "Another reason to organise the function is to give an impetus to women football in the state. Upcoming players should see that there is an opportunity for them if they play football. By treating them the same as male footballers, I believe that it would help to bring more girls to the sport."

The club flew in its players to Kerala from all across the country, and even Nepal, for the event, where they presented the trophy in front of the home fans with a lap of honour and were felicitated by Gokulam Gopalan; VC Praveen, GKFC President; Thottathil Raveendran, Mayor of Kozhikode; Anil Kumar, Secretary, Kerala Football Association; and former India international players IM Vijayan and U Sharaf Ali.

The Gokulam side was coached by Priya PV, who is the first woman coach from the state to hold an AFC A-License, and she termed the ceremony as a "major event" in her career.

"The trophy presentation ceremony at our home stadium was one of the major events that happened in my life. Even though there were several logistical hurdles to bring back the whole squad to Kozhikode for the presentation, they made it possible and had a glistering function,” Priya expressed.

“It felt special to be there in front of almost 28-thousand people and I wish more players will come up from the state and play for the country,” she added.

The side from Kerala won all of its seven games in the final round on the way to the title victory, scoring a whopping 34 goals in the process. Priya hailed the "teamwork" that went into achieving the success and stated that their preparation had begun over three months prior to the competition.

"The management staff was really helpful from the start of the IWL. They sent me for scouting to various women tournaments and we started to work at least three months in advance. The reason behind the victory is the teamwork of the whole GKFC staff," she exclaimed.

Gokulam were led by India international defender Michel Castanha, who marshalled the team from the back as they conceded just four goals in seven games. Michel, who hails from Goa, termed the moment a "dream come true".

"In my entire career, I have never felt this happy. This was a dream come true moment for us. This kind of felicitation will surely promote women football as more players will aspire to take up the sport. It has been a huge marketing event for women football in the country and I hope clubs will invest in women football as Gokulam does."

Another key player for the Kozhikode-based side was Nepal international Sabitra Bhandari, who was the tournament's top scorer and also scored the winning goal for the team in the final. Sabitra, who won the previous edition of the Hero IWL with Sethu FC as well, expressed her pride at receiving the felicitation and also hailed the competition's "professional setup".

"I feel proud to be there in Kerala in front of the large home crowd and I really loved the function and felicitation. This is the second time I won the IWL and this year, it has been a special win for me. Being with a professional setup has helped us to learn a lot. Every year the league is improving and more players are coming up with each edition," Sabitra maintained.