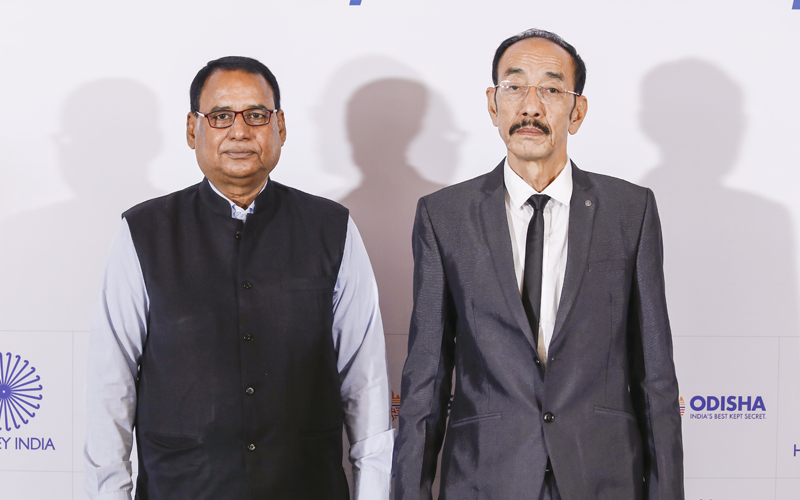 Manipur's Gyanendro Ningombam was Elected Unopposed as the President of Hockey India while former President Mohd Mushtaque Ahmad is back in the Hockey India Executive Board after being Elected Unopposed for the Senior Vice President post. The Governing Body for Hockey held its 10th Hockey India Congress & Elections today in New Delhi where the newly elected President and Senior Vice President officially took charge of their duties. Access to the meeting through video conferencing facility was also made available for Member Units who were unable to travel due to Covid-19 restrictions imposed by their respective State Governments.

On being Elected Unopposed, Ningombam becomes the first President from the North East region to spearhead Hockey India. He formerly held the position of officiating President after Mohd Mushtaque Ahmad had tendered his resignation in July this year. Ningombam, who has been elected for a term of two years, has served as the Chief Executive Officer of Manipur Hockey between 2009-2014 and has been associated with Manipur Hockey for over a decade. He has been actively involved in developing hockey at the grassroots in the North East region and is committed to developing the sport further in his new role as President of Hockey India.

Senior Vice President Mohd. Mushtaque Ahmad, on the other hand, is a veteran in sports administration with decades of experience. Under his leadership, Hockey India went on to host several major International tournaments including the FIH Men's World Cup in 2018 which was lauded for its grandeur, impeccable infrastructure and execution. He has been involved with Hockey India in different capacities in the past and most recently held the post of President till July 2020.

In May this year, Hockey India had held a special Congress through virtual medium where the members of the Executive Board discussed the status of Olympic preparations of both the National Men and Women's teams, besides resumption of the sport after the Covid-19 pandemic abrupted halted activities across the country.

With the Ministry of Home Affairs giving the green signal to resume sporting activities in September, the 10th Hockey India Congress held today witnessed the Members having a fruitful discussion on the roadmap towards resumption of the domestic calendar and the way forward for the sport in India keeping in mind the safety precautions due to the ongoing battle with the pandemic.

"I congratulate Mr Gyanendro Ningombam on being Elected Unopposed as the President of Hockey India and welcome Mr Mohd Mushtaque Ahmad back into the Hockey India Executive Board in a new capacity as the Senior Vice President. Both Gyanendro and Mushtaque have several years of experience in hockey administration and I am confident their expertise will benefit the sport. Their advice will be instrumental in developing the sport further in the country and their leadership will help us work towards achieving our goals," stated Rajinder Singh, Secretary General, Hockey India.

"We had a very fruitful meeting today with representatives from all State Member Units, there were various key discussion points; resuming the domestic calendar and the need for support of all State member Units in terms of following all the Government Guidelines to hold another successful Annual National Championship in 2021 especially with the Covid - 19 situation still prevalent in the country. Planning for the upcoming year 2021 was another key discussion point, where the status of competitions for all 4 National teams were discussed and the need for more International exposure for both the senior & Junior teams which will be key in the preparations leading up to the Olympics and Junior World Cups respectively. Our aim is to ensure we leave no stone unturned in the teams' preparations for the Olympics & Junior World Cups," he added.