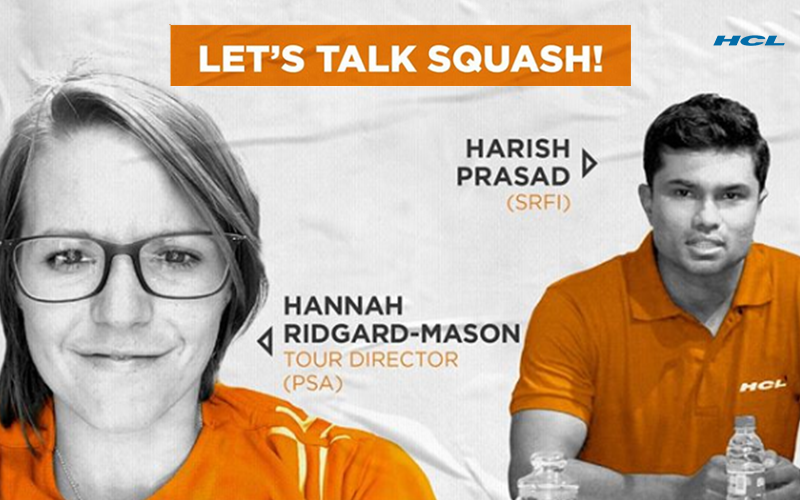 Hannah Ridgard-Mason: ‘Seeing Squash in the Olympics would be the biggest game changer’

In the latest episode of #AskChampionsAnything, PSA Tour Director Hannah Ridgard-Mason, talks about the importance of Squash development for youngsters, spotlight on urban outdoor Squash, SRFI’s contribution to the sport, games’ scene post the pandemic and never ending quest for the inclusion of Squash at the Olympic and much more.

On the wake of the global pandemic, that has halted all the sporting events across the world, the HCL for Sports and Squash Rackets Federation of India (SRFI), have been conducting interactive live sessions in their Facebook handles inviting eminent personalities from the Squash fraternity, named #AskChampionsAnything.

The third edition of the #AskChampionsAnything, featured Harish Prasad (SRFI) and Hannah Ridgard-Mason (Tour Director of PSA), in a live session on Wednesday supported by HCL for Sports, Squash Rackets Federation of India and Fisto Sports. It saw the two, discussing about various subjects including Squash post the pandemic, the future and development plans for the sport globally and Indian squash.

Hannah, who confirmed the possible resumption of World Squash only post Mid-August, also revealed closed door Squash, domestic non-ranking  squash tournaments to be some of the options, but anyhow  the logistical planning considering the man power required to host them might pose a  challenge at the moment, concerning the safety issues. She also said the ranking systems to be frozen at the moment and some measures including dropping out some of the events will be taken to ensure fairness when things resume.

Harish Prasad, who spoke about the SRFI’s schedule stated 2020 to have been a year stocked up with numerous events.

“As we approached 2020, we had a lot of plans ahead. We have four of our scheduled events completed with five more to go. This was also the year we planned intra-city events specifically for school and college going players, to broaden the grassroots and this was something we have never had before,” said Harish adding, “We also decided on creating a structured Squash Curriculum Program which can be implemented in the school Physical Therapy sessions to create awareness and increase participation. There were numerous preparatory events planned out for Asian and CWG 2022 including some of the activities for doubles. We also had a couple of big tours with PSA (World Tour Events), with the regular series of Challenger Events. There has been a lot of planning and huge support from Sports Authority of India (SAI) as well and HCL for Sports has also ensured we progress from time to time. We have a lot of plans but we’re not sure if we will be able to do it as effectively as planned.”

Outdoor squash in the offing

On being asked about the some of the development Programs PSA has designed to popularize the sport, Hannah said that the outdoor squash to be an idea topping the list.

“Squash is an expensive sport. So, we figured, urban outdoor squash which will make it more accessible to people, using simplified courts or maybe pop up courts, a good option to get wider participation.  We are also looking to combine gaming with Squash using walls with Interactive Squash, to attract youngsters. They love computer games and probably they will take it forward.”

Harish Prasad regarded Squash to be removed of the “Metro City Sport” or the “Rich Men’s game” connotation associated with in India and has foreseen consistent escalation in various terms.

“We have seen consistent growth in India.  Squash used to be termed as “Metro City Sport” or the “Rich Men’s game”, but it’s not the case anymore.

Squash tournaments are held all across India, data comparison shows squash to have expanded from 10 to 22 cities within three years. Now juniors are also being paid significant prize money comparatively.

Read: How coaches find ways to support young athletes in the of lockdown

“We are trying many things to increase audience by having activities between games, streaming live in all mediums, ensuring print media covers, but it’s very difficult to get broadcasters but it will definitely be an add on. Organizations like JSW and HCL for Sports have also been of immense support,” she said.

Hannah also stated the PSA & WSA merge to have been the biggest game changer improving the sport globally.

“We have made great strides, there’s still a long way. Entertainment industry is extremely competitive. Since the PSA and WSA have joined together things have changed massively in terms of participation. We are able to reach more people with the advent of Social media platforms also. As long as these platforms grow its easy to get thing out and pull people in.”

She also appraised the SRFI of their initiatives for the betterment of the sport.

“India stands fourth in terms of representation by countries. SRFI is doing a great job programs that looks good, to popularize the sport in school and get kids involved which is very vital for the development of the sport.”

On being raised a question about seeing Squash in Olympics, Hannah considered it be something that would be a huge stepping stone for the sport and it’s something really unfortunate.

“Squash should be in the Olympics. Deserves it more than other sports that are included. There may be a lot of reasons why Squash is not maybe because Olympics always look to attract new and different crowds and not traditional and it might be one of the reasons. But I think getting a sport into the Olympics is more of a political thing. We have keep working harder and show what kind of collective community we are and what benefits we can provide to everyone. And we have got a new CEO working closely with them. We are a whole community working for that,” she signed-off.

Considering squash one of the fittest sports, should Squash be included in the Olympics?