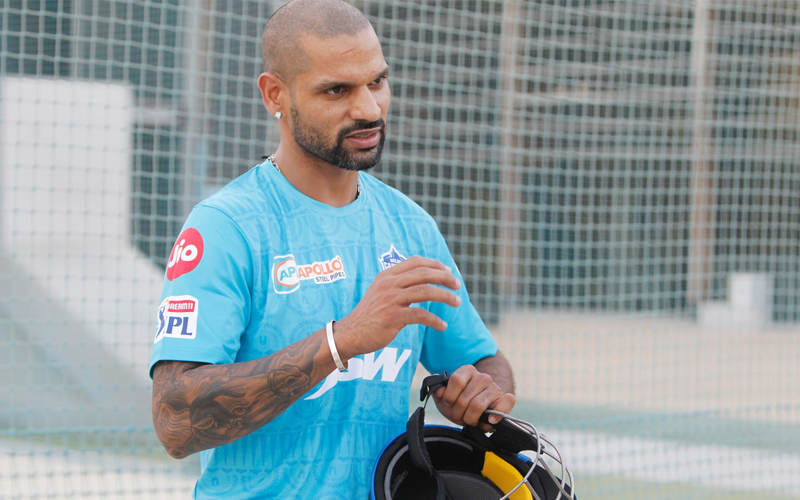 Have a balanced side which can do well in the UAE, says Delhi Capitals’ Shikhar Dhawan

Delhi Capitals will be banking on the experience and guidance of opener Shikhar Dhawan, who believes his team can lift the trophy this season.

Even though India's hard-hitting opener Shikhar Dhawan has played for other franchises in the IPL, him and Delhi Capitals have looked like a match made in heaven ever since the left-hander re-joined the JSW and GMR co-owned franchise back in 2018. In his homecoming season, the 34-year-old scored a total of 521 runs in 16 matches at a strike-rate of 135.67, which made it his second-best IPL season in terms of runs accumulated. Speaking to the press on Sunday, Dhawan said he is confident that his team can take the cup this season.

"As a team, we are looking forward to the tournament. We are really confident and are building a great bond. We are all coming back to cricket now, and are already creating that energy, and creating that bond within the team. I feel the trust is also very good between all of us, and I think we have a very balanced side which can do well in the conditions here in UAE. We are confident that we are going to take the cup this season," said the dashing opener.

Much of Delhi Capitals' success last year was down to the overall team performances and proactive captaincy from Shreyas Iyer, and Dhawan believes the addition of more experienced brains will only help the young captain. "Last season he led in a very nice manner, and with Ashwin, Ajinkya coming in with their experience, I think they will share their insights, and it can be really helpful for the team. I think Shreyas has an open mind to learn from both seniors and juniors, and he will lead us in the right way."

Commenting on how Delhi Capitals' depth in the spin department can help during the season, the opener said with wickets expected to get slower, the bowlers will come in handy but focus will be on all departments. "With only three venues being used and lots of matches happening, I think during the course of the season, wickets will turn and get slower, and that's where our great spinners in Ashwin, Sandeep, Amit, and Axar will help us. Their experience will be really valuable. Not just our bowling, but our batting goes deep, so we will focus on a good overall team performance throughout. The whole team has to play well - that is our focus, and if we are able to do that, we can become champions," said Dhawan, oozing with confidence.

Asked if less travel and having limited venues during the season will make it easier for the batsmen, Dhawan said, "Not traveling much will definitely help us in avoiding fatigue and being able to recover quickly between matches. When you say it might be easier for batsmen, it depends on the pitches. If the pitches aren't good and have wear and tear, then it becomes difficult - to score off the bowlers and at a quick rate."

Speaking on the challenges faced by the players due to the bio-secure bubble, the 34-year-old said players might find it tough to find an outlet to take their mind off the sport, but credits his franchise and the BCCI for providing a secure environment. "There are challenges of course - you don't get to see new people and can't go outside your bubble, or even interact with anyone like you normally would. When a player goes through something tough, they will need to deal with it themselves - they won't have an outlet. They will need to be strong. I believe where there is a challenge, there is an opportunity as well, and I see this as an opportunity to gel with my teammates. To do that, we have a team room where we can bond with our teammates, play video games. It is like a family here, and the franchise has done well to provide such an environment to us."

Not short of self-belief, the Delhi-based batsman also commented on his plans with the national team. "Currently, I'm not in the Test team, but that does not mean I have lost hope of making a comeback. Whenever I have had the opportunities, like in the Ranji Trophy last year, I ended up making a century, and return to the ODI team. I believe as long as I have the bat in my hand, I can keep scoring and keep performing well. I focus on my process - which involves staying fit and strong - scoring consistently - if I keep doing that, the rest will follow," said Dhawan, who also agreed that franchises not playing at home will make it a level field for everyone.