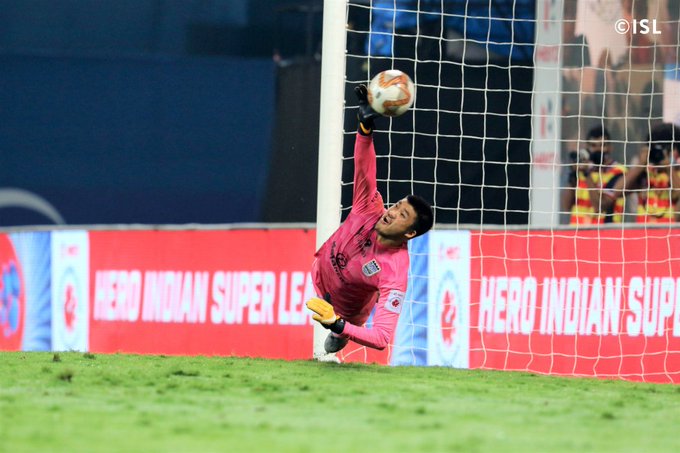 It was late heartbreak for FC Goa in the second-leg as Mumbai City FC booked their place in the final following a dramatic win on penalties.

Two hundred and ten minutes of football over two legs, yet there was no winner to head into the final between Mumbai City FC and FC Goa! Such was the battle, that it came down to ISL's first-ever sudden death in a penalty-shootout to decide the first finalist of season 7. And it turned out to be Mumbai City FC who had the last laugh as they edged FC Goa on penalties 6-5 at the GMC Stadium, Bambolim.

One of the highlights of the thriller was when both coaches sprung a surprise as they decided to substitute their goalkeepers with the contest heading into the penalty shootout. Goa brought on Naveen Kumar while Mumbai raised some eyebrows when they decided to field Phurba Lachenpa in place of skipper and one of the best goalkeepers of the season Amrinder Singh. But, as it turned out to be, the Sikkimese gloveman survived the battle of nerves, helping the Islanders book a place in the final for the first time.

With all to fight for in the second leg, this contest was always going down to the wire. FC Goa remained in the ascendance with Mumbai failing to register a single shot on target in the entire game. The opening half proved to be a cagey affair with neither side able to assert their dominance.

The best chance of the game arrived in the 27th minute, for Goa but Mumbai's backline stood tall. Alberto Noguera beat his marker and made his way into the box before firing a shot at goal that was parried away by Mumbai keeper Amrinder Singh. The ball eventually fell in the path of Redeem Tlang whose first-time effort was blocked by Amey Ranawade.

Despite failing to test Goa keeper Dheeraj Singh, Mumbai missed an opportunity to open the scoring during the closing stages of the first half after winning a free-kick in a dangerous position. Ahmed Jahouh found Hugo Boumous outside the box, who blazed his effort over the crossbar.

Goa made one change at the break with Ishan Pandita coming on for Redeem Tlang and the substitution sparked energy in their attack as the Gaurs were clearly the better side in the second half.

They created a big chance just minutes after the restart. Alexander Jesuraj received Saviour Gama's cutback and fired a shot that seemed to be heading to the net but Amrinder made a crucial fingertip save to push the ball towards the post, out for a corner.

Amrinder soon made another clever save to deny Goa. After Adil Khan blocked Adam Le Fondre's effort, Goa launched a quick counter-attack and Jesuraj drilled a low cross inside the box for Pandita whose diving header was kept out by the Mumbai custodian.

Goa kept pushing for a winner and could've ended the contest in injury time, had it not been for James Donachie missing a gilt-edged opportunity. Edu Bedia aimed his free-kick at the far post but the defender failed to connect, missing the ball by inches.

In extra added time, Mumbai were lucky not to concede after an error. Pandita pounced on a poor backpass from Hernan Santana but Amrinder snuffed out the danger in time.

The shootout initially looked to be headed Mumbai's way after Goa missed their first two penalties. But Mumbai then missed a couple, restoring parity. Finally, after Glan Martins had missed his kick, Rowllin Borges stepped to drive home the winning penalty and sent his team to the final.