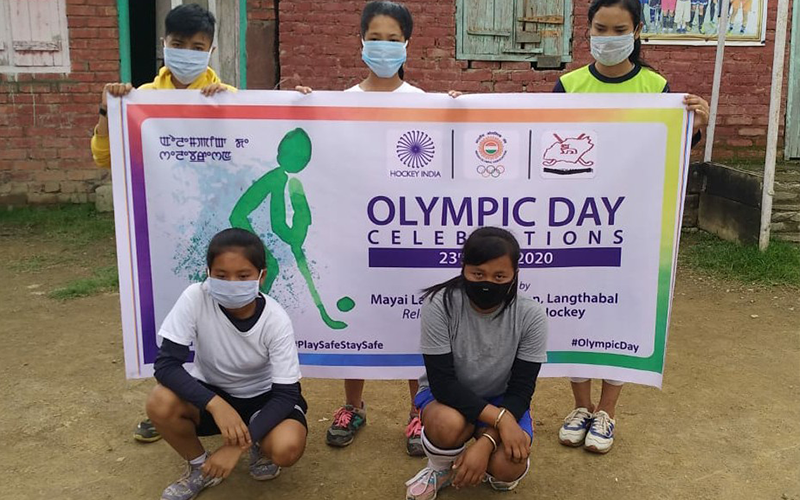 With this year's Olympic Day being held under unprecedented circumstances, Hockey India celebrated the 72nd Olympic Day digitally with its Member Units showcasing Olympic values among the young children, players, coaches and administrative staff, by taking part in various activities while respecting the social distancing and safety guidelines prescribed by the Ministry of Home Affairs over a week.

Hockey India’s Member Units marked this special Olympic Day with activities that spread the message of spirit of sportsmanship and unity through hockey-focused activities including quizzes, wellness programs, art and craft competitions, write-ups and essays on Olympic Day and Olympic values, along with spreading awareness on the importance of healthy living, staying indoors and staying fit. Through various events planned throughout the week leading up to Olympic Day, it was Hockey India's ambition to strengthen the link that children, young people and adults have with the sport, and through these activities it brought together people from different walks of life, different age groups, without any gender and physical biases, to provide an opportunity to reminisce their favourite Olympic moments and promote the Olympic values.

Olympic Day was first introduced in 1948 to commemorate the birth of the modern Olympic Games on 23 June 1894 at the Sorbonne in Paris. The goal was to promote participation in sport across the globe regardless of age, gender or athletic ability. Marking the 72nd Olympic Day, Hockey India through various activities endorsed International Olympic Committee's campaign and themes of #StayStrong, #StayHealthy and #StayActive in these trying circumstances for everyone. These three themes emphasized on mental and emotional well-being, making sure to promote a healthy way of living and staying closely connected to their favourite sport - hockey.

The hockey community from across the country was united in sending their entries to Hockey India in the form of pictures and videos. Among many such activities organised by the various Member Units, Hockey Bihar was seen organizing a quiz competition for men and women along with celebrating the day by cutting a cake, while Chhattisgarh Hockey encouraged fitness activities by sending videos of young players trying out skills and working out at home.

Goans Hockey organised a web-talk which included conversations around life skills learned through sport which enables sportspersons to cope with COVID-19 related stress and tackle the situation aptly. Hockey Gujarat showcased their creative skills as their youth took part in an art competition where impressive drawings were made relating to Indian hockey's glorious Olympic journey. Hockey Haryana organized a quiz competition, art & craft competition, hockey skills & drills display, workout from home videos where participants took part in what turned out to be a knowledge sharing session among the players, officials, hockey generalists and coaches.

Hockey Jharkhand, Hockey Karnataka, Le Puducherry Hockey, Hockey Punjab, Hockey Maharashtra, Hockey Rajasthan, Telangana Hockey, Uttar Pradesh Hockey were seen organizing quizzes, art, craft and essay writing competitions, and work-out from home series to promote the Olympic values among their participants. Meanwhile, Manipur Hockey too were in the forefront of championing Olympic Day activities and was also seen helping their local community by delivering masks to the participants and promoting safety, along with conducting art competitions, webinar and lectures on the history of Olympic Day and its importance.

Hockey Mizoram made use of technology as celebrations were also taken to TV with discussions on Olympic Day taking place, along with group discussion on WhatsApp. While, Hockey Madhya Bharat was seen distributing masks and sanitizers to its players and officials while also emphasizing on the importance of social distancing. As a special tribute to India's greatest Olympian ever, Hockey Chandigarh observed a two-minute silence in the fond memory and remembrance of Late Padma Shri Balbir Singh Sr. who sadly passed away last month.

Speaking on the occasion, Mohd. Mushtaque Ahmad, President, Hockey India, said, “The Olympic Day Celebration is a great way of strengthening the link that children and young adults already have with sport and it provides a great opportunity for people to get their first experience of the sporting culture which practices no caste, no creed, no economic or gender bias. Sport is a level playing field and Olympic Day Celebration aims to promote fitness, well-being, culture and education while also observing values of excellence, friendship and respect. It was indeed overwhelming to see various Hockey India Member Units commemorate the Olympic Day Celebrations digitally while being creative and innovative in their approach and also taking all necessary precautions to ensure social distancing and healthy living. I believe the theme for this year's Olympic Day emphasized on maintaining our physical and mental well-being and staying indoors. On behalf of Hockey India, I send our warmest regards and gratitude to all our Member Units for promoting Olympic Day Celebrations with engaging initiatives even though we all are witnessing unprecedented tough times!"