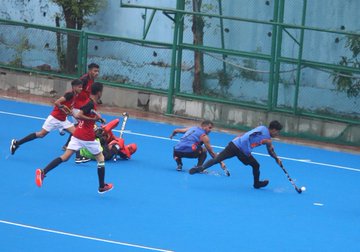 More than 550 athletes comprising 28 teams from across India will participate in the coveted 1st Hockey India Men Academy National Championship kicked off to a rousing start on Monday in Bhopal, Madhya Pradesh.

Following six days of group stage matches, the quarter-finals will be played on October 24, the semi-finals two days later, and the final on the 27th.

Twenty-eight teams, with over 550 players as well as coaching and support staff, will arrive in Bhopal this week for the first-ever Hockey India Junior Men Academy National Championship 2021. The maiden tournament for academies will provide young hockey players a platform to showcase their talent and impress selectors, who will be present at the National Championships. Good performances here will hold great prospects for young and aspiring players to make it to the National Program.

After six days of pool matches, the quarter-finals will be played on 24 October, the semi-finals will be held on 26 October whereas the Medal matches are scheduled for 27 October.

Government of Madhya Pradesh has left no stone unturned in their preparations to successfully host back-to-back tournaments and also provide a safe environment for the athletes to compete. Smt. Yashodhara Raje Scindia, Hon’ble Minister, Department of Sports & Youth Welfare, Technical Education, Skill Development & Employment said, "It was great to see talented players compete for the coveted title in the 1st Hockey India Sub Junior Men Academy National Championship 2021 in Bhopal. We ensured the covid protocols were followed. I believe having more tournaments like this at the Junior and Sub Junior level will really help build a strong grassroot system and it will only help the sports grow further. We are very happy to support Hockey India in their endeavour and host more such tournaments in Bhopal as it will inspire more children to take up the sport."

Apart from several SOPs laid out by Hockey India, each and every athlete, coach, technical officials participating in the 1st Hockey India Junior Men Academy National Championship 2021 would need to submit a negative COVID RT-PCR test report on arrival at Bhopal with the test taken within 48 hours prior to departure to Bhopal, Madhya Pradesh. Further to this, all athletes and officials need to have the Aarogya Setu app on their devices. They must also follow physical distancing measures at all locations, except athletes on the field. A Covid-19 task force will also be constituted by the organising committee to ensure the implementation of the protocols issued by the MHA and the respective state government.