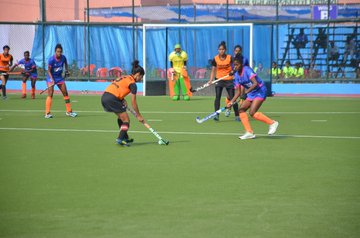 Hosts Hockey Jharkhand make it to the semifinals along with Hockey Haryana, Hockey Chandigarh and  Hockey Maharashtra.

After two quarters of intense play, the two teams went into the half-time break with the scoreboard reading 0-0. It was the hosts who scored in the 31st minute through Elin Dungdung. Hockey Punjab were quick to pull one to equalise in the 37th minute through Karmanpreet Kaur. But after that, the hosts upped their ante in attack as they pumped goals through Deepika Soreng (39'), Elin Dungdung (47', 52’), Rajni Kerketta (49') to take a comfortable 5-1 lead. Though Captain Harpreet Kaur scored a goal in the 54th minute for Hockey Punjab, Rajni Kerketta (57') did a fine job of finishing the play for hosts with a sixth goal in the net to ensure they moved up to the semi-finals.

In another closely-fought quarter final encounter, Hockey Haryana beat Odisha 5-3 to make it to the semi-final. Although it was Odisha who scored first through Aten Topno (15'), Hockey Haryana equalised via Seema (16') but Odisha bounced back with a goal by Jyoti Chhatri (20') to take a 2-1 lead. But following the half-time break, Hockey Haryana worked in strong and structured attack to score back-to-back goals. It was Monu (32'), Bharti (40'), Pinki (43'), Manju (49') scored goals for Hockey Haryana to take a fine 5-2 lead. Aten Topno (51') scored Odisha's third goal but that wasn't enough to stop Hockey Haryana from romping home to a victory.

All the matches are being streamed live on watch.hockey and the Jharkhand State Government official YouTube channel.