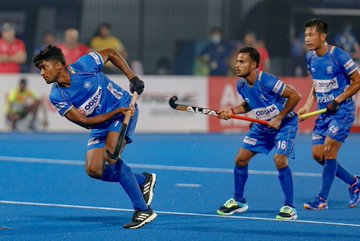 India Colts will face off against Poland in their third Pool B match of FIH Odisha Hockey Men's Junior World Cup knowing that a win would confirm their place in the quarter-final stages.

After a remarkable 13-1 win over Canada in Group B match of FIH Odisha Hockey Men's Junior World Cup Bhubaneswar 2021, Team India will look to seal a spot in the Quarter Finals when they take on Poland on Saturday.

With one win and a defeat, India are currently placed second in Pool B ahead of Poland on goal difference. France, who have a perfect record till now, are set to top the pool.

This means that in the quarterfinals, India face the prospect of running into European giants and top seed Belgium, who are likely top Pool A.

India had lost their first match 4-5 against France on Wednesday. While reflecting on the team's performance so far, Reid said, "We are creating enough opportunities. We need to work on the conversion rate. We are a bit leaky at the back. We need to be stronger and get in front a little more. We were better against Canada. The best way to learn is to make mistakes. We learned from our loss to France. We missed out on this learning phase for a couple of years due to Covid, but it was good we learned quickly."

Speaking on the prospect of facing strong teams in the knockout stage, the Chief Coach asserted, "If we beat Poland on Saturday, we may face Belgium in the next stage. But to win FIH Odisha Hockey Men's Junior World Cup Bhubaneswar 2021, you must beat everybody. After losing to France, it became clear to us that we have to win every game to win back-to-back titles. It gives us a bit of clarity."

Meanwhile, the team's Vice-Captain Sanjay, who has scored hat-tricks in both of the matches, spoke about his learnings from the tournament so far. He said, "Coaches keep telling us what new techniques we can employ. What other teams are trying out, and I am working on them. Some things are working for me. I also spoke with India Men's Senior Team defender Harmanpreet Singh who gave me some tips."

Can the Indian Colts challenge Poland for quarter-final spot?