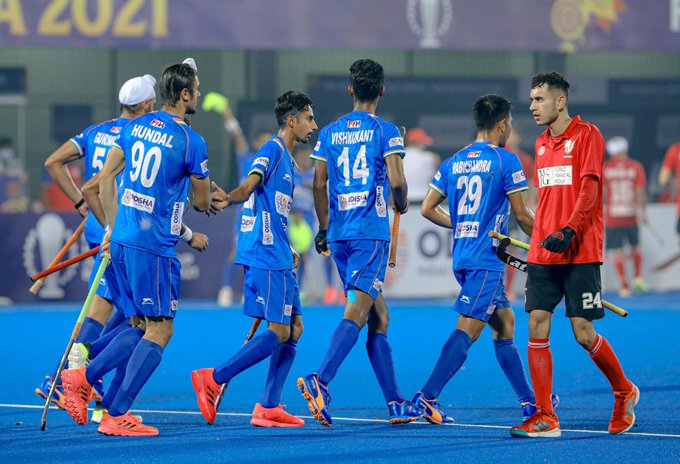 India equal their record of biggest victory since the 13-0 demolishing of Singapore in 1982.

The Indian hockey team outclassed Canada 13-1 in their Pool B match of the FIH Hockey Men’s Junior World Cup 2021 at the Kalinga Stadium in Bhubaneshwar, Odisha on Thursday.

This was the second-highest number of goals scored in a single match at a men’s junior World Cup since Spain beat the USA 17-0 earlier in the day.

Vice-captain Sanjay scored a hat-trick - his second of the tournament - as did Araijeet Singh Hundal while Shardanand Tiwari and Uttam Singh scored two goals each.

The big win put India second with three points in two matches in Pool B. They sit behind France who they lost to in a high-scoring thriller in their opening match.

The loss all but knocks Canada out of the junior World Cup as this is their second-consecutive defeat - they had earlier lost 1-0 to Poland.

India made a rapid start to the game, as Uttam Singh put his shot in the back of the net after an attacking move down the left.

Skipper Vivek Sagar Prasad - a two-time ‘FIH Young Player of the Year’ - soon made it 2-0 after a mazy dribble from Maninder Singh to go into the first quarter break.

India were dominant in the second quarter, creating multiple chances and scored two more goals. Canada pulled one back from a penalty corner but India led 4-1 into half-time.

The script continued in the third quarter, with India dominating possession and moving the ball around without much opposition.

The Indian hockey team scored three goals from drag flicks as three different scorers - Shardanand Tiwari, Araijeet Singh Hundal and Sanjay scored one each to keep India comfortably ahead at 7-1.

With Canada looking dispirited, India ran riot in the final quarter, scoring as many as six goals, as Sanjay and Araijeet Singh Hundal both completed their hat-tricks.

Defending champions India face Poland in their final pool match on Saturday, with a draw enough to take them through to the quarter-finals.

Can the Indian Colts challenge Poland for quarter-final spot?