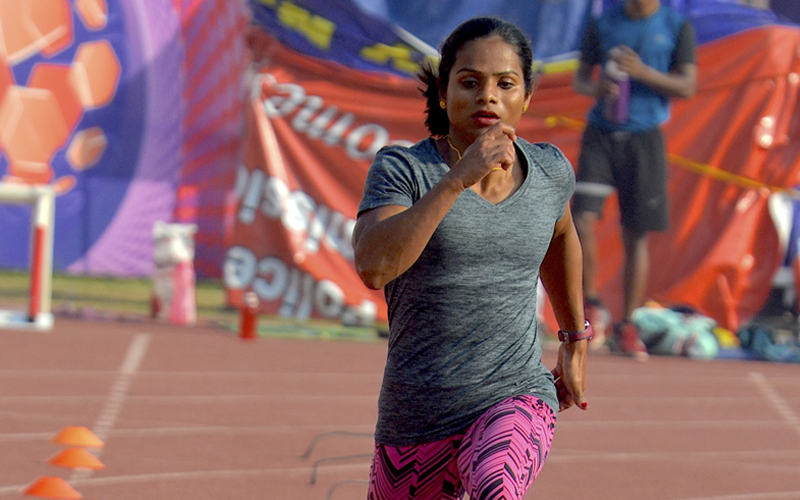 World University Games champion Dutee Chand will resume her quest for the Olympics  Games qualifying standard at the inaugural Khelo India University Games that begins here on Saturday. “Yes, I will sprint for my University (Kalinga Institute of Industrial Technology) next week,” she confirmed during training on Friday.

As many as 3400 athletes from 159 universities across the country have been given entries in 17 disciplines, including rugby which is among the six team events. A number of them are looking at the Khelo India University Games to make a mark not only for their institutions and themselves but also to catch the eye of talent scouts.

In the time to come, it would become an important rung in the ladder that the country’s student athletes seek to climb. The attempt is to make the Khelo India University Games an aspirational competition for India’s youngsters with twin objectives of helping them find the balance between sport and education.

“I may make the grade on the strength of my world ranking (currently No. 54 in 100m and No. 43 in 200m) but I really want to make it to the Olympic Games by achieving the qualification standard. To improve my ranking, I will need to compete in some quality events and, for some reason or the other, that has not happened,” she said, returning to her intense workout at the Kalinga Stadium.

Dutee Chand clocked 11.26 seconds in winning the semifinals of the Asian Athletics Championships and atfer becoming the first Indian to win a sprint gold in the World University Games in Napoli last year, she a managed a 11.22 in the National Open Athletics Championships in Ranchi in October last. The Olympic qualifying standard has been set at 11.15 seconds.

Some of the country’s best young archers like Komolika Bari, Sangampreet Bisla, Muskan Kirar and Sakshi Tote are slated to be in action. “There are not too many competitions for us and hence we will see the very best vie for honours,” said a Delhi University archer, indicating that a lot of the nation’s best marksmen and women would make it a point to turn up at the Games.

With 191 and 183 athletes respectively, Panjab University (Chandigarh) and Guru Nanak Dev University (Amritsar) will have the largest contingents. These numbers reflect the intense competition between the two universities in the past year, with Panjab University winning the prestigious Maulana Abul Kalam Azad Trophy in August 2019 after 13 years.

Maharshi Dayanand University (Rohtak) is the only other contingent that exceeds 150 athletes. Punjabi University (Patiala) and Kurukshetra University complete the list of five teams with more than 100 athletes. And, as many as 30 institutions will owe their presence in the roster to one athlete each.