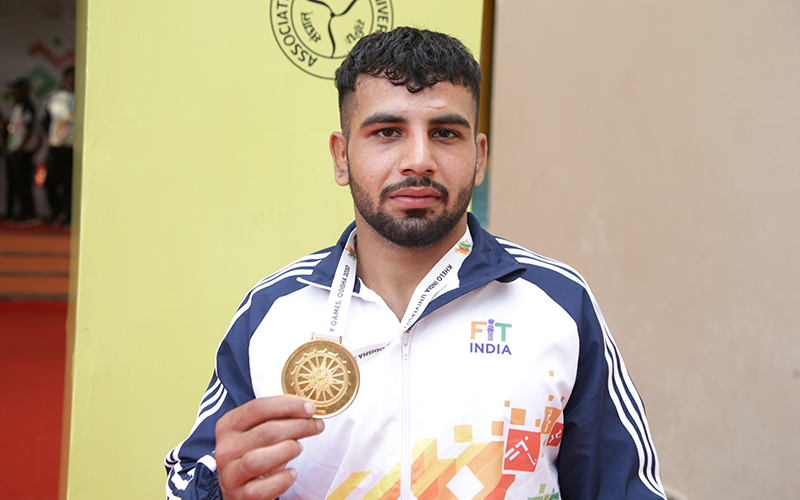 Honey Pal wins 63kg gold, gives credit to the man behind the Greco-Roman revolution in India

Like most Indians, Honey Pal Singh too made the transition from freestyle to Greco-Roman wrestling a few years back.

On Thursday, here at the Khelo India University Games 2020, he struck gold in the 63-kg class and promptly attributed his success to the growing popularity of the Greco-Roman style in the country; he was, however, quick to also explain the role played by the Gulzar Akhada in Zirakpur and, more importantly, the man behind it, in this paradigm change: Ranbir Singh Kundu.

A much-admired coach, he has been churning out one talented wrestler after another for years; indeed, in more ways than one, has presided over this slow transition. He even sold off his house in Mohali about 10 years ago to set up his famous akhara, now adopted by SAI, that has ushered in this revolution.

Not too surprisingly, Honey Pal, the BA first year student from Sant Baba Bhag Singh University, has also emerged from his akhara.

His story is also quite similar to other rising wrestlers, with just a minor twist. A knee injury restricted his leg defence, forcing him to give up freestyle wrestling. He, however, struggled with the new style but vast amounts of time on the mat, coupled with Kundu’s ability to come up with the right tactics, allowed him to make his mark.

“In freestyle, you can attack freely, and bouts are more high scoring,” Kundu explained. “Greco-Roman, on the other hand, is very technical, and defensive abilities decide bouts. Honey Pal took some time to make the adjustment,” he added.

It helped that Honey Pal has been a wrestler since he was seven years old, following in the footsteps of his cousin Prabhpal Singh. The second child of a farming family in the village of Khojala near Amritsar, he would trudge to the akhara, alone from a young age to learn the art.

At the age of fifteen though, his coaches and parents decided he had outgrown the competition at the academy and sent him to Kundu in Zirakpur. He went on to participate and win medals at several junior national tournaments, even representing India at the Sub Junior World Champions in Athens in 2017.

The much-admired Kundu expressed happiness at the progress made by his wards. “We have been working at Greco for years, focussing a lot on the grassroots, and making sure that the kids get enough competitions to sharpen their skills,” he said.

“But it was only last year, when Sunil Kumar won the gold medal at the Asian Wrestling Championships in Delhi that the sport has really taken off.

Now, at his academy, he has 15 Greco-Roman wrestlers and 40 freestylers, something he said was unthinkable not too long ago.

He conceded that earlier not many Indians were making the shift to Greco-Roman. “But that mindset is changing now, with a few starting straight-away with this style. I am confident that India will start winning more medals internationally very soon,” he added.