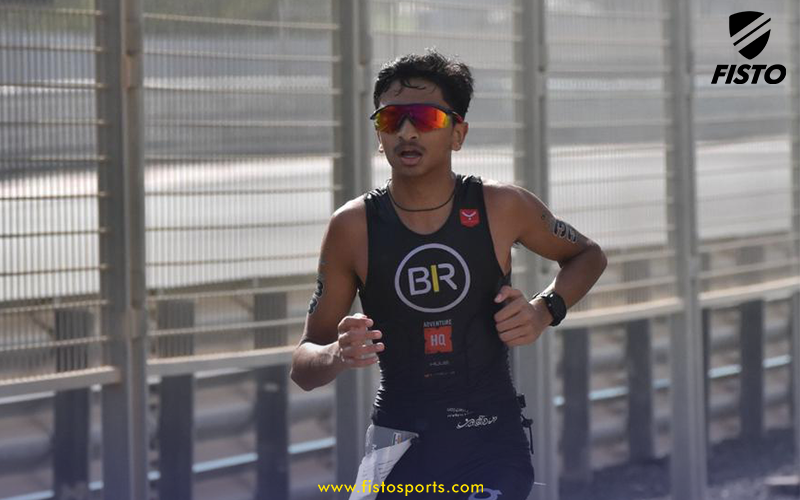 It is rare to meet any 16-year-old who knows exactly what they want to do for the rest of their life. Mihir Bathija certainly falls into the category. He is a pro triathlete and cyclist studying in Indus International School, Pune, who races heavily in the Olympic distance triathlons.

For many people, the idea of competing in a triathlon is (initially at least) impossible. A triathlon consists of a 1,500-metre swim, 40km bike ride and 10km run. It is considered the most challenging single-day event in the world.

The Mumbai native Mihir has been a sports lover since he was a kid — but it wasn’t until 2014 that he became a professional triathlete.

Although Mihir has been one to show a consistent confident and can-do attitude in the way he has strived for what he has achieved, even so, it has to be admitted that entering the world of triathlon was still to be quite daunting.

He is also the youngest and only Indian to be invited to compete in the U.A.E Men’s Elite Sprint Distance Triathlon at TriYas, in February 2020.

That sense of adventure and fearlessness will be put to good use over the coming years as Mihir seeks to progress within the world of triathlon.

We recently had the chance to ask Q&A with young talent and hear his story unfiltered.

You are very young, and have quite a few medals under your belt – not in one sport but two and I am sure it must have been a quite rollercoaster journey so far in your dual sporting career, so tell us about how did you first get into sports? How old were you, who introduced you to cycling and triathlon, and what are your first memories about the time when you knew this would be something you pursued?

Since the beginning, I was the type of person who would not stop playing or involving in some kind of sport which is challenging.

In 2014, My father one day asked me to participate in a duathlon series and that’s where I got my first experience of struggle. It was a 750m run, 6km bike and 750m run. I ran the first 750m and I was fine but when I got on the bike, when the final 3km were left my chain snapped and I had no option but to run back 3kms to the transition, where I was exhausted and gasping for breath but my father was the one who motivated me to finish the race.

That was the first lesson I learned in sports – to always finish the race without worrying about the outcome. Then we enrolled in another cycling race later that year which was a 5km off-road Mtb race where I won a bicycle through a raffle draw.

The next year, 2015, I took part in the same new duathlon series but with my new road bike and I won the series in my age group. By the end of the series, I realised I am loving what I am doing and want to continue this for the rest of my life.

At what point did it sink in that you could be really good at both cycling and triathlon?

In the beginning, I started participating in cycling events but, when my father enrolled me for my first triathlon, I struggled swimming in the seawater but once I joined a triathlon club gradually, I started gaining confidence in swimming in sea waters and started to win races. I felt I loved cycling as well as triathlon since I was stronger than the other participants on the bike legs.

Though both cycling and triathlon are such demanding event, they’re fairly different worlds. How have you managed to live, breathe, and succeed in both?

Cycling and triathlon although are two different worlds altogether, it is just the love for both sports and it comes down to my interests and how I manage time with my training and school. I would say cycling came just naturally to me and with structured training plans and consistent training, with a couple of races thrown in to test my mettle, I have gradually improved my performance over the years.

With the addition of swimming and running, I get an overall development of my body which does complement cycling. It is the balance between the training plans which help me succeed in both disciplines.

Who were your sporting idols when you first became interested in the sport? What was it about their character or achievements that you admired?

When I was first interested in cycling and triathlons it was Chris Froome who was my idol who won the Tour De France 4 times and his work ethic is what I admired most.

A professional sports career, or two, is not all fun and games. Training can be brutal, and the sacrifices can be huge. How do you view the pros and cons, and what is most rewarding about the pros?

In a professional sports career, many sacrifices that have to be made and these cons can be viewed as new opportunities in life as well. Brutal training is needed to overcome struggle and willpower to keep pushing, as a world champion is never a world champion, unless there are no struggles. But to be awarded as a world champion is my dream to achieve one day, which can be the most rewarding thing.

Cycling on an elite pathway requires dedication and commitment; aside from providing funding and transport for training, how did your parents support you emotionally pre-competition?

My parents have always supported me in setting targets for my races, what events I should aim at winning or for my nutrition, what I should consume and what not to.

Competing at such a young age, how did you juggle dual sports with studies and how do you structure your training to ensure that you’re not putting yourself in danger of injury etc.?

Competing at a young age has helped me in time management and planning my week of what I should do has played a key role in balancing studies with sports. Training structures are all handled by my coach.

When I feel low after a race I reflect on my weaknesses and how much more effort has to go into my training to overcome these weaknesses. It is my parents and coach who guide me to what I should be aiming for in future and how to work towards those goals.

It was my first duathlon when I was in a bad situation when the cycle chain snapped off my bike and I had no option but to run back 3kms to reach the transition and where I had never run that distance earlier.

This taught me a lesson that my first finishers medal also did not come easily and it is the effort you put in which gives value to your achievements. It also taught me to never leave a race halfway even though you may be last but the joy is in completing the event.

My best performance so far is the Roy Nasr triathlon where I timed 1hour 6mins 47secs for a sprint distance in 2019.

Is there a time record you’re aiming for?

The time record I am currently aiming for is a sub 60min sprint distance finish. Later when I get into Olympic distance, I am aiming for a 1hr 50min-odd timing.

What are your future plans as far as cycling/triathlon goes? Do you hope to continue training through your school/college years and beyond?

I will not stop training through my school/college years as I aim to become a World Champion in triathlon.

Which celebrity would you go cycling with?

Best compliment you have received