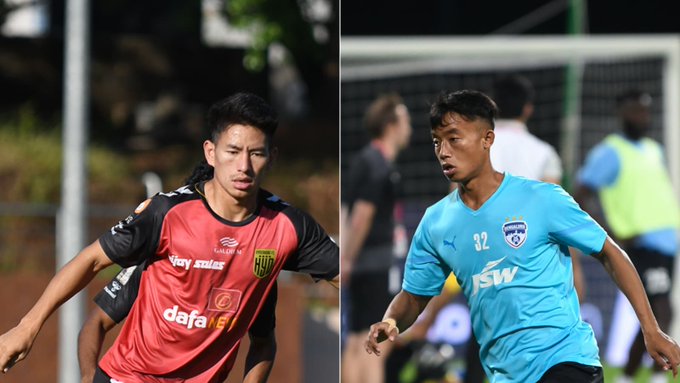 Southern rivals Hyderabad FC and Bengaluru FC will both look to get back to winning ways when they lock horns in the 2021-22 Hero Indian Super League (ISL) at the Athletic Stadium in Bambolim on Wednesday.The Manolo Marquez-coached side are placed seventh in the points table with four points from three matches. Marquez was unhappy with his team's first-half show against The Men of Steel and would want his charges to improve when they take on Bengaluru.The Blues, meanwhile, lost 1-3 to table-toppers Mumbai City FC in their last game, leaving them with just one win from four matches. But coach Marco Pezzaiuoli said after the game that he was happy with how the team responded through Cleiton Silva after conceding a goal inside the first ten minutes.Both teams have shown promise with Hyderabad getting the better of Mumbai in their second match of the season. Bengaluru got off to a winning start after they downed NorthEast United FC 4-2 but have since then found it difficult to remain consistent.The two teams will look to steady their ship and it is a lapse of concentration in crucial moments that has hurt them so far.

The boys take on the Blues from Bangalore today and we expect some 🎇 coming your way... 😉

Marquez said, "What we need is consistency. All teams are strong in this League. Hence, the results have fluctuated the way it has. I assume the final standings will be decided only in the final stages of the season""Halicharan Narzary and Mohammad Yasir will be out for the game against Bengaluru. Hopefully, Halicharan will be available for the next game but Yasir will be out for a long time," added the Spaniard."I don't think it has been a bad start, we can make some things better. We spoke about different situations where we could have four or six points more than we do. I agree, we can defend better, but when you see all the games, you'll see the opponent has few chances. But there are many more chances in other games. What we need to do now is work hard for a clean sheet, and that's our aim against Hyderabad," Pezzauioli said.Bengaluru are unbeaten against Hyderabad in the Hero ISL. In the 4 matches between the two, Bengaluru have won one and drawn the other three. For Pezzaiuoli, Sunil Chhetri's poor run of form is a cause for concern. The legendary forward has now gone four matches without scoring a goal in the League.The former champions have multiple players who remain doubtful or completely unavailable for selection. "Prince Ibara is undergoing a test right now, but we're not sure yet. The same goes for Udanta Singh, Iman Basafa and Yrondu Musavu-King. Sarthak Golui has left the bubble to tend to a family emergency," Pezzauioli updated on the eve of the game.