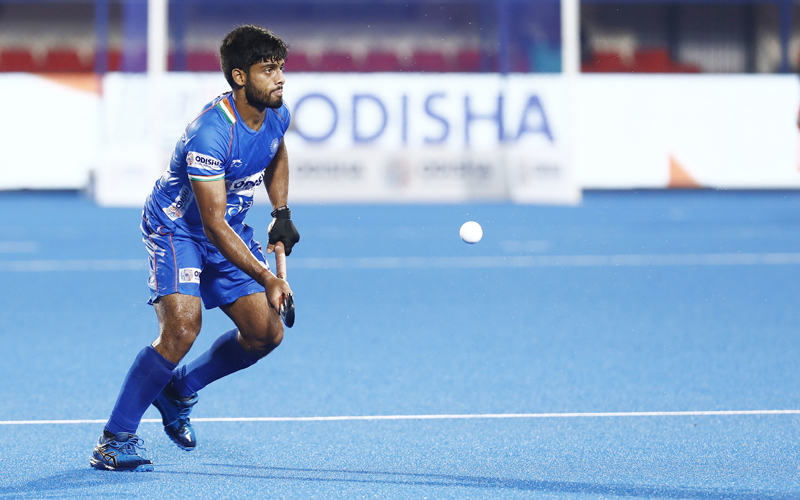 Varun is happy all six players who had tested positive have fully recovered and are back on the pitch; credits Hockey India for ensuring guidelines are being followed.

Defender and Drag flicker Varun Kumar who has recovered from Covid19 and is back on the field working on getting back to his old form said the experience of testing positive was like no other. "As sportsmen, you face a lot of different challenges in your career - there are ups and downs - frustration when you can't score, disappointment of defeats and the joys of winning - but this feeling of having tested positive for Covid19 was unlike any other. I felt like I had a moral responsibility towards everyone around me, to ensure I don't end up passing it to someone else. And I am really happy that all six of us could recover well," expressed the player from Mithapur, Punjab.

The drag flicker who was part of the FIH Junior World Cup winning India Colts Team in 2016 said that following quarantine protocols when players arrived in SAI, Bengaluru for the National Camp in August and subsequently ensuring all protocols and guidelines are followed when players returned to activities helped contain the spread. "Hockey India and SAI have both ensured that all protocols and guidelines have been followed, and provided us with the best of facilities to tackle this challenge. It was due to their efforts that we managed to survive this unusual storm, and the care we received from all quarters meant that we could eliminate the virus without causing any damage to anyone," stated the defender.

Varun further added that the players are now ensuring they follow to the T what the Team's Chief Coach and Scientific Advisor are guiding them to do to return to previous form. "Now it is all about making sure we are doing what the Chief Coach and our Scientific Advisor have asked us to do. We are on the correct path, and having resumed sports activities, I feel like I am regaining my rhythm. There is no better feeling than playing hockey, and having been away from it, you get a sense of what you've missed out on as well."

A big fan of football great Cristiano Ronaldo, Varun wished the ace Portuguese player a speedy recovery. He said, "A lot of people around the world, including top-level athletes have contracted the virus, and last night I heard one of the fittest people in the world - Cristiano Ronaldo - also testing positive for the virus. I hope he recovers soon and returns to action."

He further stated it is everyone’s moral responsibility to follow all the Government norms. "I feel it's a collective responsibility we all have. Everyone at home, and those who are forced to venture outside, should all take precautions and not take it lightly."