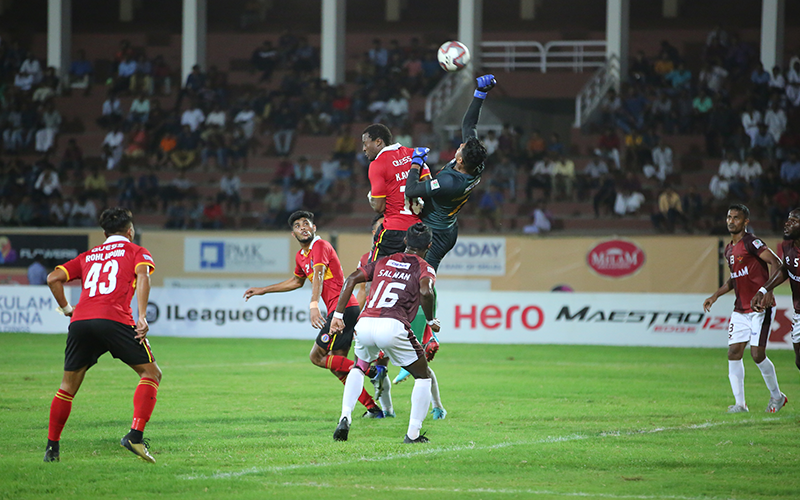 Marcus Joseph broke the deadlock in the ninth minute before Victor Perez’s penalty in the 24th levelled the scores. The hosts went down to 10 men in the second half, before being reduced to nine players minutes before the full-time whistle. However, they showed great resilience to hold on.

Gokulam gaffer Fernando Santiago Valera showed faith in his XI that earned a point against Punjab and named an unchanged side for the evening, while QEB Head Coach Mario Rivera reflected two alterations. Gurwinder Singh replaced Asheer Akhtar at the back, while Kassim Aidara made his return to the line-up.

It was Gokulam who came all guns blazing after kick-off and caught the visitors napping on a couple of occasions in the first 15 minutes. It took the hosts only nine minutes to go in front through skipper Marcus Joseph, who had a crack from just outside the box and found the back of the net.

Joseph kept on menacing the QEB backline and in the 11th minute, almost doubled the advantage. He ran the length of the East Bengal half with the ball and played a delightful give and go with Henry Kisekka, who did brilliantly with his return pass to put Joseph through. With only the keeper to beat, Joseph struck the woodwork.

The visitors found their way back into the game in the 24th minute, when Juan Mera’s mazy run was recklessly intercepted by Naocha Singh inside the box, conceding a penalty and his first yellow card of the game. New signing Victor Perez stepped up for the spot-kick and converted successfully to restore parity for QEB.

The tempo of the game dropped a couple of beats following the equaliser, as either side struggled to penetrate for the remainder of the half. Marcos Jimenez De La Espada had a crack from distance, which wasn’t far away for a speculative strike but that’s how it remained going into the break, a goal apiece (1-1).

Gokulam made a horrendous start to the second half as they went down to 10-men. Naocha Singh was given his marching orders and was shown a second yellow and subsequently, a red card for yet another bookable offence.

The hosts showed great fight and resilience despite going a man down and continued to threaten and test QEB’s resistance Nathaniel Garcia’s immaculate long ball found Joseph, who could only get a head to the end of the delivery, but Mirshad was well-positioned to collect. On the break, Abhash Thapa went on a solo run and after having made his way inside the Gokulam box, forced a quality save out of Ubaid.

In the 72nd minute, Juan Mera showcased his flamboyance by making yet another delightful run, completely leaving Andre Etienne at bay and when he had the opportunity to shoot, went for an audacious chip over the keeper instead. To his agony, the woodwork came to Ubaid’s rescue.

Salman, in the 81st minute, seemed to have done everything right with his right-footed curler but Mirshad made amends for his earlier error and produced an excellent save to tip it over the bar.

10-man Gokulam almost it won it at the death when substitute Lalromawia’s perfectly placed shot found the back of the net to send the home crowd over the fence, but the celebrations were short-lived since the linesman had his flag up for offside. Protesting the decision, Haroon Amiri was shown his second yellow card of the day, as Gokulam ended up with nine men, minutes before the full-time whistle was blown.

Both sides were left to rue missed chances and what could have been. Quess East Bengal remain at fourth place with 20 points, while Gokulam Kerala rise a place above to sixth with 19.

Nathaniel Jude Garcia was adjudged to be the Hero of the Match.

Master of world derbies, Fowler now has Kolkata in his sight