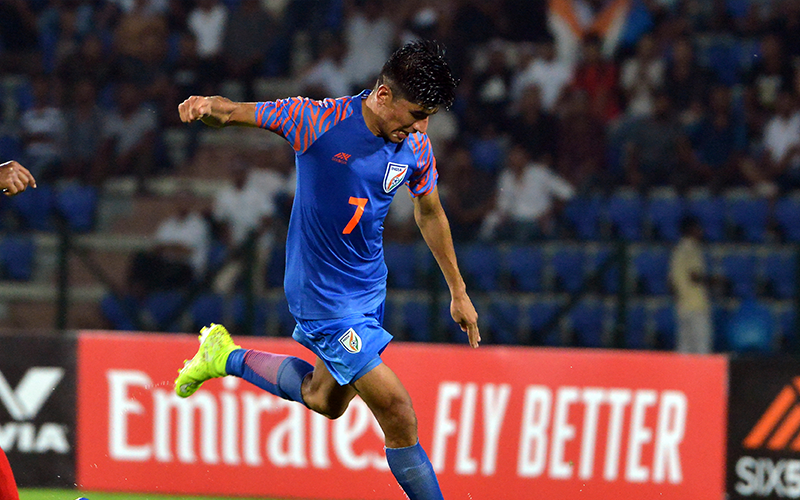 With the latest edition of the Hero Indian Super League having been completed, it is time for the players to recharge their batteries and prepare themselves for the next campaign. For midfielder Anirudh Thapa, who hails from Dehradun, the "right kind" of rest after a long season is important, as he aims to keep himself in top shape -- both physically and mentally.

"It is important to get the right kind of rest. One recovers physically but it takes time to recover mentally. Back-to-back matches, travelling, etc. all takes its toll. It is important to remain fresh mentally. Spending time at home with my family and friends always helps and helps take my mind off football, which helps me get a fresh start," the former AIFF Academy cadet told www.the-aiff.com.

Thapa's usual routine in the off-season consists of a number of outdoor activities -- from trekking to a "light game" of football. But with the global breakout of the Novel Coronavirus disease (COVID-19), he has had to make a few adjustments.

"On a normal day I would go cycling or trekking in the mornings and then in the evenings, I enjoy playing some light football with my friends, which is fun and also helps me remain fit. Now though, I start my day with stretching exercises and later in the day, I do core exercises and at times, yoga as well," he mentioned.

The young gun also urged people across the country to take "adequate precautions" in the wake of the ongoing COVID-19 pandemic.

"It's a time for me to take a break and spend time with family. It is extremely important to take adequate precautions to stay safe and I encourage everyone to follow the guidelines and play their roles in containing the disease,” he explained.

The midfielder was a key figure in Chennaiyin FC's odds-defying run in the recently-concluded Hero ISL season which saw them enter the final after a phenomenal run in the league stage. Thapa's campaign in numbers was an excellent one -- with him averaging 50 successful passes per game at an accuracy of 75%, recording six assists and scoring one goal -- a cracker in the first leg of the semi-final against FC Goa.

"It was a dramatic season with Chennaiyin FC. But we couldn't get the happy ending we wanted. I don't focus on my individual performance much but this season was satisfactory, overall. As compared to the last 2-3 seasons, there has been an improvement and I can see the progression myself. My assists, passing accuracy, fitness levels -- have all gone up, which is a positive sign,” he maintained.

Thapa made his senior national team debut in 2017 and has since gone on to establish himself as a regular in the side. Since Igor Stimac's appointment as head coach in May last year, the midfielder has featured in seven out of 10 games, and also found the back of the net in a 1-0 win against Thailand in the King's Cup in June.