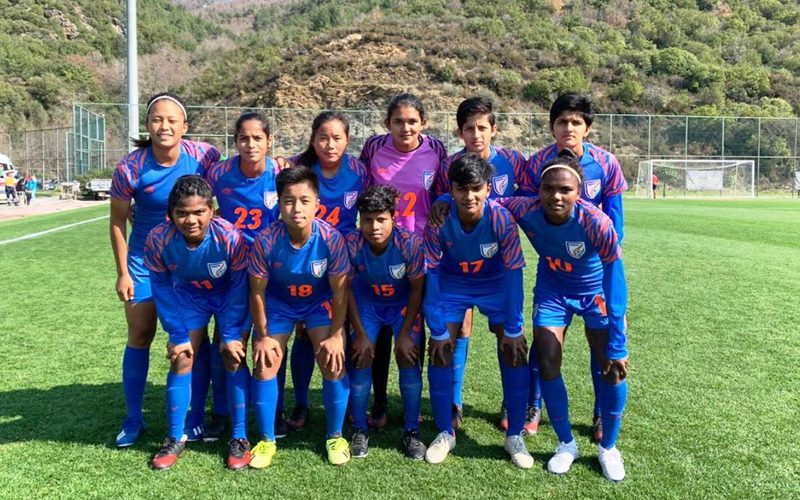 In a six-goal thriller, Indian U-17 women’s football team and Romania played out a 3-3 draw in Turkey.

The India U17 women's national team played out a 3-3 draw against the Romania U17 women's side on Sunday (February 16, 2020) in a friendly match that took place in Turkler, Turkey. Mariyammal Balamurugan scored a brace for India, with Sumati Kumari scoring the third goal for head coach Thomas Dennerby's team.

The first half began with both teams battling it out to seize the initiative, with Sumati asking a lot of questions of the Romanian defence. In the 15th minute, she raced into the penalty area but was denied by a last-second interception.

A similar opportunity cropped up in the 27th minutes after she latched on to a through-pass from Anju but saw her effort being blocked.

The opening goal for India finally came in the 40th minute, with Mariyammal breaking the deadlock. Anju found Sumati in the penalty area, who flicked it to Mariyammal -- who made no mistake with the finish.

However, at the stroke of half-time, Borodi Adina equalized for Romania by converting a cross from the wings.

The second half saw India push for the go-ahead goal and in the 57th minute, Mariyammal added another to her tally. Sunita Munda put in a grounded cross from the right flank and Mariyammal was on hand to slot the ball into the bottom-right corner of the net.

Just six minutes later, Sunita turned provider yet again -- this time for Sumati -- putting in another center from the right, which was tapped home.

India continued to move the ball in the Romanian final third but in the 78th minute, Romania pulled one goal back through a direct free-kick taken by Mirea Roxana.

With seven minutes to go, Romania scored through Borodi Adina, who headed in the equalizer. The match ended with the scoreline reading 3-3.

The two teams will face off for their second friendly match on Wednesday (February 19, 2020), with kick-off scheduled for 3 PM IST.