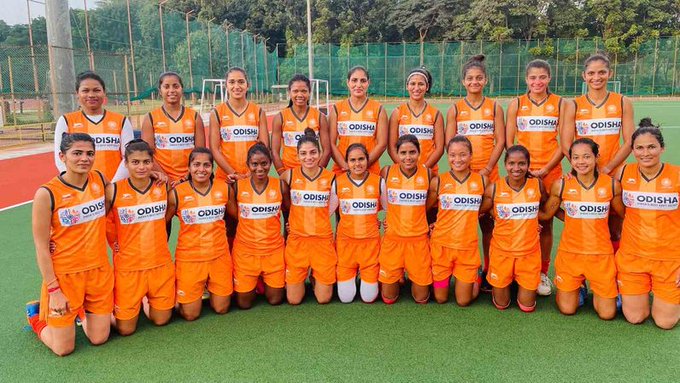 Hockey India on Wednesday named the 18-member Indian Women's Hockey Team for the upcoming Women's Hockey Asia Cup which is scheduled to be held between 21 - 28 January 2022 at the Sultan Qaboos Sports Complex in Muscat, Oman.

The defending Champions India will battle it out against China, Indonesia, Japan, Malaysia, Singapore, South Korea and Thailand for the title. Top four-teams from this tournament will qualify for the 2022 FIH Women's Hockey World Cup to be held in Spain & Netherlands.

The Indian team features a formidable lineup with 16 players who were part of the historic fourth-place finish at the Tokyo Olympic Games 2020. Ace goalkeeper Savita will lead the team, in the absence of Rani who is undergoing rehabilitation in Bengaluru, and experienced defender Deep Grace Ekka has been named as the Vice Captain. The team includes goalkeeper Rajani Etimarpu and defenders Gurjit Kaur, Nikki Pradhan, and Udita.

"This is a very important tournament for us and I am happy with the team we have chosen which is a mix of some very experienced players along with talented youngsters who have shown great potential at the international level. Though we were a bit disappointed with how things panned out for us at the Asian Champions Trophy, we were able to return to camp in SAI, Bengaluru and put in some good sessions of hockey to prepare well for this challenge," explained Chief Coach Janneke Schopman.

The defending Champions are grouped in pool A along with Japan, Malaysia and Singapore. They will begin their campaign on opening day against Malaysia on 21 January and will play Japan on 23 January. India will take on Singapore in their last pool A match on 24 January. The Semifinals will be played on 26 January and the final match on 28 January.

In the previous edition held in 2017, India beat China 5-4 in a tense shootout to lift the title.