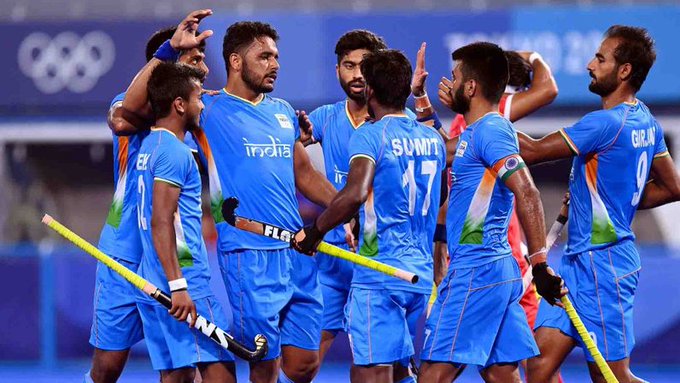 Continuing their winning momentum, the Indian Men's Hockey Team registered their third consecutive win in the round robin league stage here at the Oi Hockey Stadium.

Riding high on confidence following their back-to-back victories, India started their last Pool A match brightly, making lots of short and quick exchanges to create goalscoring opportunities in the early minutes. While pressing hard, young Vivek Sagar Prasad did get a chance to draw the first blood in the 7th minute but missed the target by a whisker. On the other hand, hosts Japan tried to make inroads on the counter attacks, with Hirosama Ochihai hitting the shot on target, but missed out on finishing it. In the 12th minute, India earned their first Penalty Corner, and Harmanpreet without making any mistake converted it giving India 1-0 lead at the end of the first quarter.

India wasted no time capitalising on their lead as Gurjant and Simjranjeet's combined effort made the scoreline 2-0 in the 17th minute. Playing his 50th international match for India, Simranjeet provided a stunning assist to Gurjant, who just guided the ball in the goal post with ease. The hosts, though, pulled one back through Kenta Tanaka's field goal in the 19th minute. An error in defence by Birendra Lakra gave away the ball cheaply to Tanaka, who took a few steps forward and beat PR Sreejesh with a stunning shot. India, still dominating the possession tried to make inroads, but Japan's defence stayed alert and averted the danger. India entered the 10-minute half-time break with a one-goal advantage over the hosts.

The best of our third successive win in the Tokyo Olympics. 📸

Playing under the pressure of trailing by a goal, Japan started the third quarter aggressively and scored an equaliser in the 33rd minute through Kota Watanabe's shot. However, the Indian attack responded quickly and took the lead again in the 34th minute. It was Shamsher, who put India back in front. He smartly deflected Nilakanta Sharma's shot into the post, which he received from the edge of the circle. Enjoying the possession in the middle, India won their second Penalty Corner in the dying minutes of the third quarter, but Harmanpreet's shot was deflected by the Japanese defender and the scoreline at the end of the third quarter was 3-2.

Both teams started the final quarter on an attacking note, making inroads in each other's striking circle. It was Seren Tanaka who came up with an initial shot to score an equalise, but India's custodian stood tall to deny it. In the 51st minute, India doubled their lead as Nilakanta deflected a remarkable pass from his compatriot Surender from the left flank. Two minutes later, India won their third Penalty Corner of the match, but Japan's defence denied Harmanpreet's fiery shot. In the 55th minute, Japan won their first Penalty Corner,  and Sreejesh made another great save to deny Japan their third goal. Still attacking hard, India won their fourth Penalty Corner, and it was Gurjant who expertly found the back of the net making after receiving a pass from Varun Kumar making the scoreline 5-2 in the 56th minute. Japan also pulled back one in the 59th minute through Kazuma Murata's shot. But, that was not enough for the hosts as India capped off their final Pool A match with a remarkable 5-3 win.

Chief Coach Graham Reid's post-match comments:  "Better performance tonight. First-quarter was pretty good, we lost a little bit after they scored. In the second half, we came out and sort of regained control over the game. But, I thought we played better. We really tried playing at a much higher tempo tonight, trying to get on the tempo that we are going to need on Sunday. I think we mixed that up pretty well and played a controlled game. Good to get a couple of field goals, created a lot of opportunities, but I think we still need to get better at those outcomes in the circle."