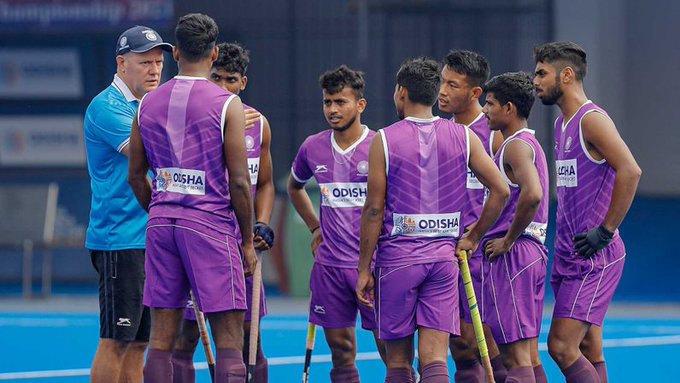 FIH Hockey Men's Junior World Cup holders India will be looking to put a rocky build-up behind them when they face France in their opening Group B game on Wednesday (8pm IST).

Defending Champions India will kick off their campaign at the FIH Odisha Hockey Men's Junior World Cup Bhubaneswar 2021 against France in a Group B match on Wednesday. Speaking to media ahead of the encounter, India Men Chief Coach Graham Reid gave his thoughts on the match. "It's always difficult with the first game where you do not have too much knowledge of the opposition. Both teams are in the same boat. So, it's exciting as well," he said.

"When we went to Europe earlier this year, we understood playing international matches is very different from playing internal matches. Our practice matches here against The Netherlands, Germany and the USA gave us really good competition to face. We do not read too much into those as people try different things. No one gives away too much. Still, it's nice to get a sense of the teams and it gave us videos to analyse of the things we need to learn and change," Reid elaborated on the team's preparedness for the marquee event.

'Our bonds will help us in getting good results'

With less than 24 hours to go, Odisha is once again getting ready to welcome the world when it hosts 16 teams in the FIH Men's Hockey Junior World Cup starting tomorrow at the Kalinga Stadium in Bhubaneswar. 🏑🇮🇳#FistoSports #hockey #hockeyworldcup #juniorhockey #risingstars pic.twitter.com/SF2ASKo9BI

Team India will be led by midfielder Vivek Sagar Prasad, who was part of India's historic Bronze-medal winning performance at the Tokyo Olympics. He spoke on his experience with the senior team that will help him at the FIH Odisha Hockey Men's Junior World Cup Bhubaneswar 2021.

"Chief Coach Graham Reid always tells us to put the team first. I have learned this playing at the big stage and I have implemented the same here. We have to maintain our bonds as a team on the field and off the field, and we have to stay united. Our bonds will help us in getting good results in the tournament," he said.

France Head Coach Aymeric Bergamo also spoke to the media in the pre-match virtual press conference, and he explained how his young team have prepared for the match against the defending Champions India.

"Our preparation was short because of the Covid situation. We arrived early here, so we played two games - against The USA and Chile. They were good games for us, so we feel we are ready for tomorrow," he said.

"We are ready to play our first game. It was important for us to play these practice games to get into the game mindset. So, we feel we are ready," France Captain Timothee Clement added.