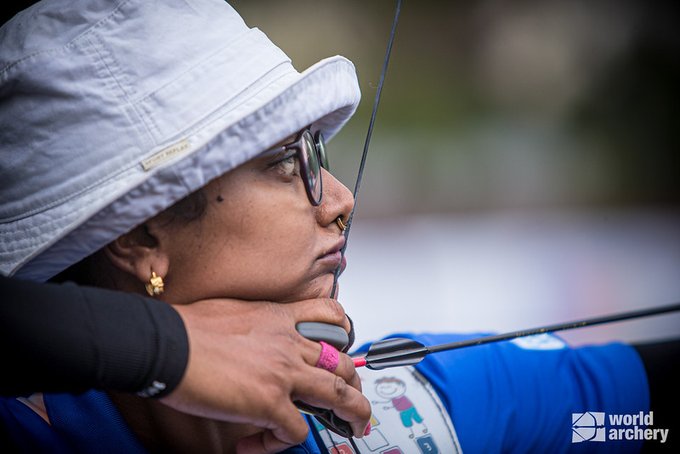 The trio of Deepika Kumari, Ankita Bhakat, and Komalika Bari had lost to Colombia on Sunday to miss the Olympic team qualification, but on Friday, they defeated France 6-2 in the semi-finals.

The Indian women’s recurve archery team, which failed to book an Olympic quota in the Final Qualifier here, was back to their best form to storm into the final of the World Cup Stage 3 on Friday.

The fancied trio of Deepika Kumari, Ankita Bhakat and Komalika Bari had lost to lower-ranked Colombia on Sunday to miss the Olympic team qualification, but on Friday they just dropped a set before defeating sixth-ranked France 6-2 in the semi-finals.

World Cup Stage 3 is not an Olympic qualifying tournament.

The trio, who had won the first stage of the World Cup in Guatemala City in April, will face Mexico on Sunday in a repeat of the first stage final. World No. 3 Deepika will be in the hunt for a hat-trick of gold medals.

Deepika had earlier advanced to the mixed pair final with her husband Atanu Das, while she is also in the semi-final of the recurve individual section.

The second-seeded Indian women’s team, who got a bye in the second round, started off by beating 15th seed Spain in straight sets, before ousting seventh seed Turkey by an identical 6-0 margin in the quarterfinals.

In the last-four stage, the trio shot 57, 57, 54, 57 to beat the French team of Lisa Barbelin, Audrey Adiceom and Angeline Cohendet.

The Indian men’s team of Das, Tarundeep Rai and Pravin Jadhav, who were ranked eighth in the qualifications, lost its last-eight match to top seed Germany in a dramatic shoot-off.

The Indians squandered a 2-0 lead but their opponents Moritz Wieser, Maximillian Weckmueller and Florian Unruh won the second and third sets to lead 4-2 before the match headed to shoot-off with Das, Rai and Jadhav winning the fourth set by two points.

The Germans shot three 9s as against 8, 9 and 9 by the Indian trio to seal the win by one point.