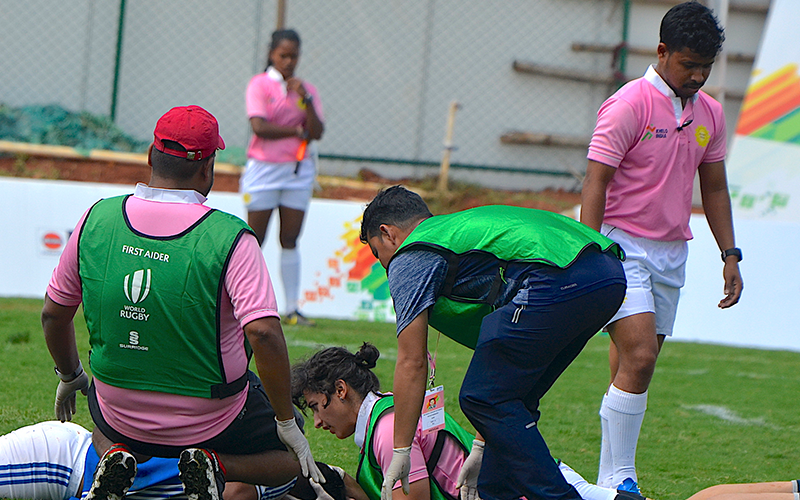 She finds it hard to resist the temptation of running on the KIIT rugby field but Vahbiz Bharucha, captain of the Indian women’s team which won the bronze medal in the Asian Women’s Division 1 Rugby Championship in the Philippines last year, knows she has a different and important job to do at the Khelo India University Games 2020.

During the matches, the qualified physiotherapist is on her feet by the sidelines, armed with an ice-pack, a bottle of water and a pain-relieving spray. Her eyes are on the ball, looking for signs of an injured player. She sprints to the field without loss of time and attends to the player, making a quick assessment of the impact of the injury and tends first-aid.

“My feet are itching to be on the field so that I can chuck the ball or maybe make a tackle, but I have come here to Bhubaneswar mainly to be the medical on the field for the three days. I am grateful to Rugby India and Sports Authority of India that they gave me this responsibility,” says Vahbiz Bharucha.

“There was a time when I focused only on the sport and my physiotherapy work took a back seat. I have also been at the other end of the spectrum and my game went for a toss and I got dropped from the Indian team. But now I have found the balance I have managed, working in the first half of the day and training as an athlete in the latter half,” she says.

One of things that caught her attention even on the first day of rugby competition is the need for players to be educated a lot more about their own bodies. “It is one of the red flags for India, especially in a sport like rugby. Some athletes are roped in because they have speed or the physique. But there is a lot more that goes into the making of a player if we want to reduce, if not completely prevent, the possibility of injuries,” she says.

The India captain, donning the physiotherapist mantle, has a simple message for the teams. “It is okay to leave the field because of an injury and not risk aggravating it. I had just finished telling a player, who got hit on the face by a rival player’s shoulder, not to move his neck, when his team-mates were provoking him to resume playing. The mentality needs to change,” she says.

The 26-year-old Vahbiz Bharucha believes the Khelo India Games is a progressive step. “The name itself is encouraging and the theme of aur khelenge to aur jeetenge (we will win more if we play more) is an effective message. It will make sense to all households that place restrictions on their children playing a sport of their choice,” she says.

“An event like this gives the athletes the chance to scope out what a professional set up looks like. The seriousness with which people are in this – athletes officials, volunteers – helps the athletes prepare for higher competitions. The benchmark is set very high. I am sure more universities will want to set up rugby teams now,” she concluded.