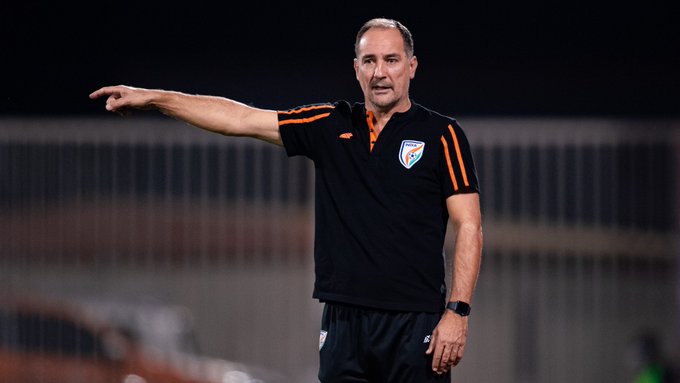 Head Coach Igor Stimac lauded Indian Arrows project and hosting the FIFA U-17 World Cup in India in 2017 for developing a "new generation of players" who went on to register India's best-ever finish in the AFC U-23 Asian Cup Qualifiers in UAE, on Saturday, October 30.

"This just proves that the project which started years ago in India with Indian Arrows and the FIFA U-17 World Cup were the right steps in developing a new generation of players who will have more confidence on the pitch and not hesitate to face anyone," Stimac stated after India finished second in Group E of the AFC U-23 Asian Cup Qualifiers on Saturday (October 30, 2021).

India finished their campaign having bagged 4 points with one win against Oman (2-1) and a draw against the Kyrgyz Republic (0-0), only two points behind group leaders UAE.

Both India and Kyrgyz Republic finished on four points apiece after finishing with a goalless draw in their last match of Group E. With both the teams on the same number of points, goal difference (0), and goals scored (2), a penalty shootout was held to decide who finishes second and third, respectively. India won the shootout 4-2 by virtue of heroics from goalkeeper Dheeraj Singh Moirangthem.

Stimac went on to congratulate UAE for hosting the Group E Qualifiers as well as qualifying for the finals.

"I would like to congratulate everyone, especially UAE, Fujairah, and everyone involved for organising the tournament so nicely. We enjoyed our stay here. Deservedly, they qualified to the finals too," he mentioned.

India, owing to finishing second in the group, still stand a possibility of qualifying to the finals next year.

"We still have hopes to qualify for the finals. The boys absolutely deserve it. Everyone in India sees that we have a bright future ahead," Stimac averred.

Dheeraj Singh had an astounding outing in the three matches, having conceded only two goals in as many games and making a myriad of saves to help his team accumulate four points. The fact that one of the two goals was scored from the penalty spot rightly highlighted the purple patch he hit under the woodwork.

"Yes, he's the man of the match because he made some crucial stops in the first half when we gave the Kyrgyz two gifts without a reason, and he was there to keep us in the game. Finally, saving those two penalties in the shootout was something extraordinary."

Stimac continued, "He's already been with the senior team for a while. He's already competed in the AFC Champions League last season and he was magnificent there. He's a fantastic stop-stopper at the penalty shootouts. We believed he could come up with a few saves there."