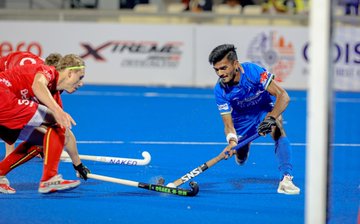 Sharda Nand Tiwari’s goal in the second-quarter turned out to be the winner as Indian Colts defense put in a fine performance to record a 1-0 win against Belgium. Defending champions India will face six-time champions Germany in the semi-finals.

The Indian hockey team beat Belgium in the FIH Hockey Men’s Junior World 2021 quarter-finals at the Kalinga Stadium in Bhubaneswar on Wednesday.

India’s Sharda Nand Tiwari’s goal in the second-quarter proved to be the difference between the two sides on the night.

Reigning champions India will face six-time champions Germany - the most successful team in the history of the tournament - in the semi-finals.

It was Belgium who started the first quarter brightly and put the Indian penalty circle under pressure in the early exchanges. As the quarter progressed though, India grew into the game and some nifty combination play from the forward line drew a few crucial saves from Belgian goalkeeper Boris Feldheim.

They're two games away from defending the title. It's game face time!#JWC2021 https://t.co/jck4CEf0g4

Belgium had a golden opportunity to sneak ahead in the opening seconds of the second quarter but a last-minute intervention from Sanjay, India’s leading scorer in the tournament, ensured the score stayed level.

Five minutes into the second quarter, though, the scoreboard was disturbed. India won the first penalty corner of the match and a lovely routine right off the training ground saw Sharda Nand Tiwari plant a sumptuous drive past Feldheim and into the Belgium goal.

With under four minutes to go for the half-time whistle, Belgium won their first penalty corner, but could only drag it wide as India carried the 1-0 advantage into the midway break.

The third quarter saw Belgium up their ante in search of an equaliser but some poor finishing by the Belgian forwards, alongside some crucial saves from India custodian Pawan, ensured the reigning champions held onto the slender lead.

Desperate for a goal in the final quarter, Belgium threw the kitchen sink at India from the get go but Pawan was at hand, time and again, protecting India’s advantage. The Indian custodian’s heroic showing included a sensational double save from a penalty corner with two minutes left.

The match eventually ended with Tiwari’s goal proving to be the winner.

India had made it to the quarters after finishing second in Pool B while Belgium had topped Pool A.

Incidentally, India and Belgium had also faced off in the final of the last edition of the junior hockey tournament in 2016. India had beat the Belgian team in Lucknow to win the title last time round.