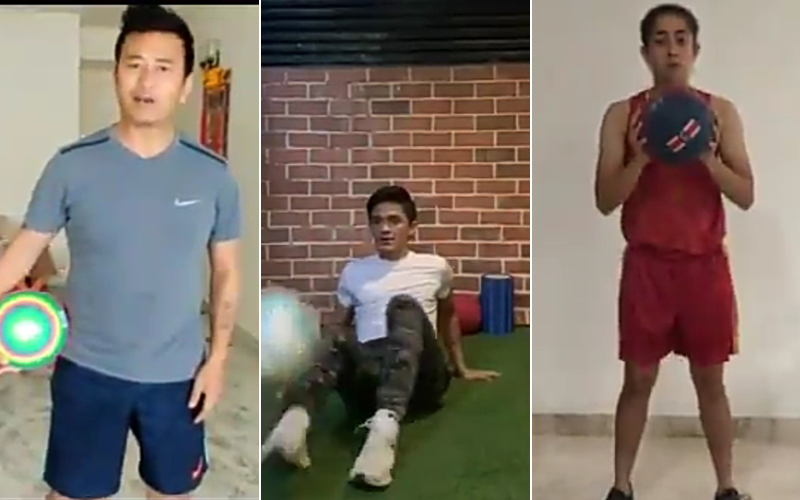 Indian Football stars make the most of staying at home

All India Football Federation on Thursday, April 2, 2020, started a #FitWithIndianFootball campaign which will see the star players of the country spread awareness about how to keep fit during the widespread quarantine.As part of the campaign the different stars of Indian football – right from the Indian Senior Men’s and Women’s Team to Indian Arrows to Indian U-17 Women’s World Cup squad to all age group National Team players will be displaying and explaining to fans several training regime using a football.

There is a lot in store for the fans who have the chance of winning National Team merchandises if they emulate and post their videos on social media handles using the #FitWithIndianFootball.

In the first episode, former India captain and talismanic striker Bhaichung Bhutia urged all the fans to follow the Government guidelines and stay indoors. “On behalf of the entire football fraternity and the All India Football Federation, I would request everyone to stay at home. Stay safe, stay healthy, and stay positive,” Bhutia urged.

Senior Men’s Team striker Jeje Lalpekhlua believes that for him “it is a pleasure” to give something back to the fans.

“Fitness is a part of our daily lives. But for the fans it has become extremely important to maintain fitness while staying indoors during the Quarantine period. As a part of the Indian Football community, it is a pleasure to show everyone how to keep fit indoors,” said the Mizo Sniper. “I urge all fans to be a part of the movement as we strive to build a fit India.”Besides Jeje, future episodes will feature the likes of Sandesh Jhingan, Ashalata Devi, Amarjit Singh, Aditi Chauhan, and several others.

Meanwhile Aditi Chauhan praised the “novel initiative.”“It is really important for everyone to stay indoors in order to see out the Corona pandemic. But that doesn't mean that we can't keep up our fitness levels. This is a really great initiative to keep all the fans get fitter. It makes for great interaction,” she stated.

Midfielder Amarjit Singh who led India in the FIFA U-17 World Cup in 2017 felt “there can be no compromise in maintaining one’s fitness levels.”

“The campaign is just a reminder on the necessity of the society to stay fit, even during such a crisis situation. Working out indoors with a ball is very possible, and possibly one of the easiest things. That’s how we can achieve a Fit India.”