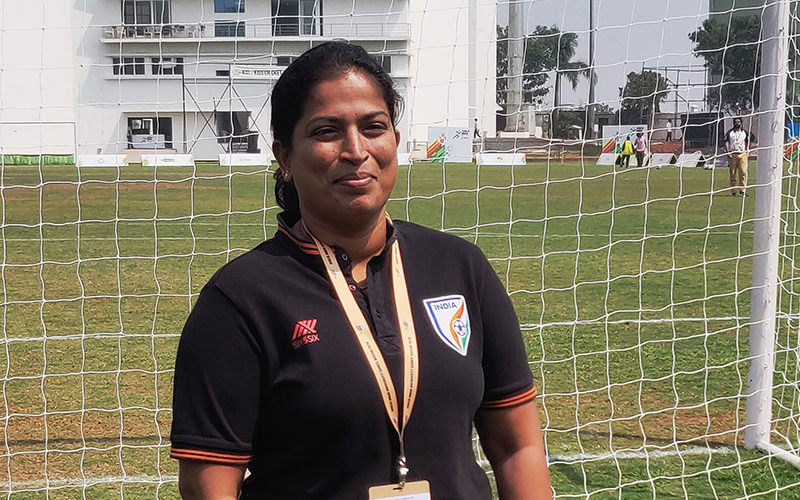 With India set to host the U17 Women’s World Cup later this year, a huge number of eyeballs are focused on the women’s game in the country. At almost every match though, one figure is omnipresent, that of Maymol Rocky, the coach of the national women’s team.

Rocky was a permanent fixture at the Khelo India Youth Games in Guwahati and she is here too in Bhubaneswar at the Khelo India University Games 2020, hoping to unearth talent for the future. “It doesn’t matter what the competition is. I believe that even if I can find two players out of them, we have added something to the national team,” she says.

Watching the girls football competition from the sidelines, Rocky marked out Annamalai University and Goa University as her favourites, and seeing as they have a number of players who have played in the recently concluded IWL it makes perfect sense. Rocky though isn’t so much watching them as watching others.

“In a team there will always be one or two outstanding players. Those are no brainers and will mostly already be part of the national camp, or thereabouts. The idea here is to look at some other players too,” she says. “Maybe someone who makes a few good decisions during a game. Someone with an ability to spot crucial passes and either make them or defend them. Just simple things. The polishing can happen later.”

Rocky is hugely impressed by the increase in number of competitions for girls in the country over the past few years and commended the Khelo India initiative also for having provided a platform for women’s football. “Everyone knows giving players more game time will help them develop better game IQ. In addition it also gives us, the coaches, more opportunities to assess them and scout them and bring more and more into the junior camps,” she says. “The more the number of players in the camp, the better it is for the Indian football ecosystem.”

While declining to reveal names, Rocky says two players who participated at the KIYG in Guwahati have already been drafted into the junior women’s camp. “We picked one player from Assam and one from Punjab when we were in Guwahati,” she says with a smile. “Hopefully we can get a few more from here.”